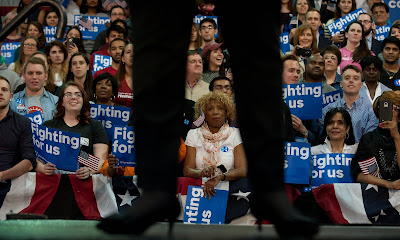 Naomi Klein, a very credible commentator on the global warming crisis that confronts human civilization, has written a book about the crisis called, This Changes Everything. More recently, Klein has written an article titled, "We're Out of Time on Climate Change."

Klein's recent article, the basis for this blog posting, discusses the Democratic primary campaign for the Presidency, focusing specifically on Hillary Clinton's claim that Bernie Sanders has been "lying," insofar as the Sanders' campaign has pointed out that lobbyists tied to the fossil fuel industry have been providing significant funding for Clinton's Presidential bid.

A video that went viral showed Hillary Clinton shoving her finger in the face of a young Greenpeace organizer, who was seeking a commitment from Clinton that Clinton's campaign would refuse fossil fuel money. Clinton denied any such support (although the facts are very clear that her campaign has received multiple millions of dollars from the oil and gas industry). In an exchange some time later, Clinton stated that the young people who seem so concerned about what fossil fuel money is doing to American politics are simply failing to "do their own research," making themselves susceptible to what Clinton has claimed are "lies" originating from the Sanders' campaign.

Eva Resnick-Day, the 26-year-old Greenpeace activist who elicited the "I'm so sick” finger-in-the-face response from Clinton, has a very moving perspective on just how fateful this election is, and how much hangs in the balance. Responding to Clinton’s claim that young people “don’t do their own research,” Resnick-Day told Democracy Now!:

As a youth movement, we have done our own research, and that is why we are so terrified for the future…. Scientists are saying that we have half the amount of time that we thought we did to tackle climate change before we go over the tipping point. And because of that, youth—the people that are going to have to inherit and deal with this problem—are incredibly worried. What happens in the next four or eight years could determine the future of our planet and the human species. And that’s why we’re out there…asking the tough questions to all candidates: to make sure that whoever is in office isn’t going to continue things as they’ve been, but take a real stand to tackle climate change in a meaningful and deep way for the future of our planet.

I added the emphasis. I highlighted those significant words: "four or eight years." Eva Resnick-Day may be right, and "four or eight years" may be all the time we have left to make the dramatic changes we need to make. Naomi Klein, a credible voice, suggests that "we're out of time on climate change."

Maybe we are out of time. Or, maybe, like the Golden State Warriors have done so often during the basketball season just ended, we can find it within ourselves, in a final few minutes, to take the actions we need to take to change our fate.

There is no doubt that Greenpeace is right in trying to get pledges from the candidates that they will refuse all oil and gas industry donations. Whether a candidate is, or is not, beholden to the fossil fuel industry should make a huge difference, as we cast our votes.

Who we elect as President will be of preeminent importance, if we only have "four or eight years."