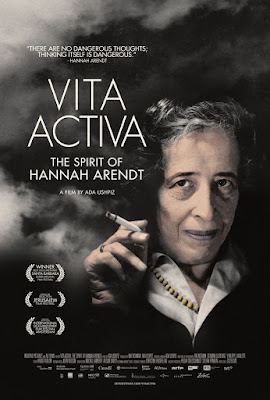 You can read Roger Berkowitz' review of this new film by clicking this link. Berkowitz is the Academic Director of The Hannah Arendt Center for Politics and Humanities at Bard College, and his comments on anything related to Arendt are always worth reading.

Here is the Arendt quote from the Berkowitz review that I want to highlight (he complains that the filmmaker has altered the quote; I'm sticking with the original wording):

What the masses refuse to recognize is the fortuitousness that pervades reality. They are predisposed to all ideologies because they explain facts as mere examples of laws and eliminate coincidences by inventing an all-embracing omnipotence, which is supposed to be at the root of every accident. Totalitarian propaganda thrives on this escape from reality into fiction, from coincidence into consistency…Before they seize power and establish a world according to their doctrine, totalitarian movements conjure up a lying world of consistency which is more adequate to the needs of the human mind than reality itself.

It is important, I think, to see that Arendt correlates totalitarianism with a predisposition to "explain facts as mere examples of laws..."

As I frequently note, in discussing my "Two Worlds" hypothesis, the World of Nature, upon which all life ultimately depends, is governed by "natural laws" that perfectly describe what happens in that world, and what must happen, because such laws, when we have learned enough about the Natural World that we can define them, are purely "descriptive" of a reality that is a given to all humans. Within the World of Nature, we act as creatures, not creators, and we are subject to the laws that govern the Natural World.

In the "human world," the world we most immediately inhabit, and a world that we create, "law" denotes a completely different phenomenon. None of the human laws that we utilize to govern our collective behavior must be obeyed. Human laws can be "broken," unlike the laws that govern the Natural World. Our human laws are not "descriptive" of what must and will happen; they are "prescriptive," and they tell us what we have decided we want or ought to do.

Within the realm of the human world that we create, a world we create, in fact, largely by articulating and then following "laws" of human design, law is the locus of human freedom.

Totalitarians shy from freedom, both from a reluctance to submit to the demands that freedom imposes, and from a fear of the vast unknown universe of possibility that freedom makes available to us.

As usual, Arendt is spot on!