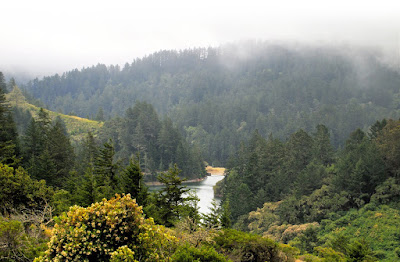 There is a debate going on about whether or not to open up the Peninsula Watershed (pictured above) for hiking and recreation. Currently, the watershed is off limits to any kind of human intrusion. The pros and cons of opening up access to the Watershed are outlined in an article, in Bay Nature, from which the above photo was taken. The article is titled, "The Peninsula Watershed: To Open, Or Not To Open?"

According to the San Jose Mercury News, in an article printed on March 15, 2016, hikers are "decrying" the most recent delay in opening up the watershed. Public access to public land sounds logical, but I keep returning, in my mind, to Thoreau's statement that "in wildness is the preservation of the world."

As recently as March 19th of this year, I quoted eminent biologist E.O. Wilson to that effect. The day before, on March 18th, I quoted Thoreau again, in providing a salute to Jack English and his Pine Valley Life. The idea that our human world is actually protected and "preserved" by wildness figures in postings on this blog on April 2, 2015, November 24, 2012, November 1, 2012, and October 31, 2012. It is my considered opinion that we would do well to abstain from touching, and turning to our own uses, those natural places on this Earth that still remain. In general, we tend to think that the World of Nature is there solely to be utilized for human projects. I tend to think we are wrong to come to that conclusion.

I was pleased, after reading the March 15th article in the Mercury, to see the following Letter to the Editor, printed in the March 16th edition:

I have concerns about the plan to expand space for recreation in the Peninsula Watershed. While I join the legions of people who would love to have more trails and access to those in the pristine vastness of the Crystal Springs area, I am very hesitant to allow people whether on foot or bicycle to enter this particular sanctum. Over the years of hiking throughout the Bay Area and elsewhere, I always carry a bag to pick up what should be packed out by the hikers and cyclists. Without fail, every hike I take, I gather trash. The likelihood of a behavior change in mindless trashing by the outdoor loving public is probably, not. Educating the public has never been easy. Keeping the watershed and the drinking water pristine is too important.

I tend to see the issue in a "philosophical" framework. Toni Thunen's letter talks about the practicalities.

I think we would be well advised to take some advice from Toni.