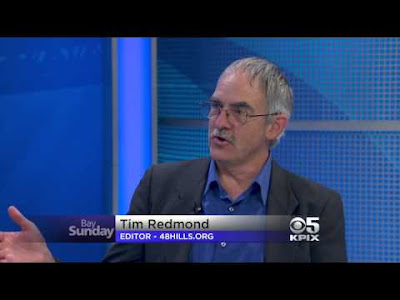 There are forty-seven named hills in San Francisco, and "one more hill to climb." That's the explanation that Editor Tim Redmond provides for the name of his unabashedly liberal daily newspaper about politics and life in San Francisco.

48 Hills is daily, and it's online. It's also free to subscribe, and I do. Look for the subscription box at the bottom right hand corner of the home page. Of course, you can also donate, and even take a tax deduction for the contribution. I do that, too. If you care about politics, and especially about politics in San Francisco, I think you should probably check out 48 Hills. The television interview from which the photo has been taken will give you some more background.

On April 5th, Tim Redmond turned his attention to inclusionary housing, and to the fact that liberal economist Paul Krugman doesn't seem really to "get it." Krugman's approach is to solve housing problems by letting developers build more housing. More housing, more density, more supply: surely that will mean that the price will go down, right?

Actually, not! And that's the point that Redmond makes:


Krugman is great on a lot of big national economic issues. He’s terrible when it comes to cities.

The guy famously came out against rent control years ago, when any urban economist with any sense knows that rent control is one of the most powerful [tools to prevent] displacement. It’s what makes an urban middle class possible in a city like San Francisco.

And now he’s saying that cities need to reduce zoning rules and allow more housing, of any height, pretty much anywhere. He praises the idea that NY Mayor DeBlasio is pushing, which is similar to what SF Mayor Lee is pushing, which in essence cedes to the private market the responsibility to provide affordable housing and assumes that some modest percentage of “affordable” units in luxury towers that are geared to the same crooks and despots now in the news will be a real solution to the urban housing crisis.

I shouldn’t have to keep saying this, but I will: You need to build at least 30 percent affordable housing in every luxury project just to stay even, and not make things worse. Which means if you want to add to the stock of affordable housing, you have to force developers to build 40, 50, 60 percent of the units for people of more modest means.

Krugman ought to know that the middle class in an American city is not a natural consequence of capitalism. It requires strict regulations and controls. It means, sometimes, slowing down the booms that make a few rich so that the rest of us have a chance, too.

That’s perfect liberalism, in the old school. Except that these great scholars and writers (and politicians) don’t seem to want to bring those policies back home

Redmond's right, and his prescription works for Santa Cruz, just as much as for San Francisco.

Don't let the developers build anything at all unless 50% or more of what they build will be permanently price-restricted to be available for sale or rent to persons with average or below average incomes.

That, not more market rate density, is what we need!