Yesterday, I attended a memorial service for Louis LaFortune. The house was packed at the Live Oak Grange. Louis was just "the best," as someone said, at pretty much everything to which he made a commitment, and to which he turned his hand. That included politics, peace activism, his family, education, music, and auto mechanics.

Louis was a teacher at the New School, in Watsonville. He had served as President of the People's Democratic Club of Santa Cruz County, and he played a leading role in Guitars Not Guns.

There was lots of music at the memorial. There was lots of heartfelt emotion. And this memorial and celebration of life was the first I ever attended at which a "Blonde Joke" played a major role in filling out a picture of who Louis really was. I guess he liked "Blonde Jokes." Here's one his sister told:

Two blondes were discussing their love life, and the first blonde told the second blonde, "Wow, last night was fantastic. I made mad love to a Brazilian."

"Really," said blonde number two; "how many is that, exactly?"

A salute to Louie!! 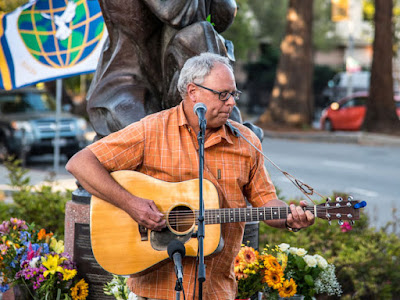