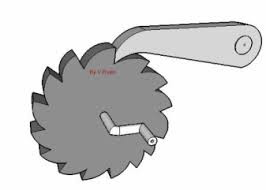 1. A device consisting of a bar or wheel with a set of angled teeth in which a pawl, cog, or tooth engages, allowing motion in one direction only.

2. A situation or process that is perceived to be deteriorating or changing steadily in a series of irreversible steps. Example: "A one-way ratchet of expanding entitlements."

1. Operate by means of a ratchet.

2. Cause something to rise (or fall) as a step in what is perceived as a steady and irreversible process. Example: "The Bank of Japan ratcheted up interest rates again."

Anyone who has ever used a ratchet wrench knows how effective the ratchet mechanism is in preventing any reversal of motion. A ratchet, as the definition says, allows motion "in one direction only."

The ratchet phenomenon can be observed in our political world, as well as in the physical world. Once some new political action or enterprise has been undertaken, and thus  has been made "real" by virtue of its having actually occurred, it is almost impossible to reverse direction and to "go back." Whatever the action was, continued action of the same kind can only go forward.

In an article printed in the March 8, 2016 edition of The New York Times, Jameel Jaffer and Brett Max Kaufman, both associated with the American Civil Liberties Union (ACLU), argue that efforts should now be made to "Limit the Next President’s Power to Wage Drone Warfare."

President Bush started the drone wars, but Mr. Obama vastly expanded them. Almost entirely on his watch, United States strikes have killed as many as 5,000 people, possibly 1,000 of them civilians. The president approved strikes in places far from combat zones. He authorized the C.I.A. to carry out “signature strikes” aimed at people whose identities the agency did not know but whose activities supposedly suggested militancy. He approved the deliberate killing of an American, Anwar al-Awlaki.

What would a President Trump do? I'm betting that Bob Dylan knew about ratchets. I bet he's got the best prediction:

You taught me how to love you, baby
You taught me, oh, so well
Now, I can’t go back to what was, baby
I can’t unring the bell
You took my reality
And cast it to the wind
And I ain’t never gonna be the same again

Thanks to our last two Presidents, and especially thanks to President Obama, we've learned to love the idea that the United States can kill people that the President thinks should be killed. No trial. No due process. No remorse.

Good luck putting that back in the bottle, whoever the next President is. Ain't never gonna be the same again!