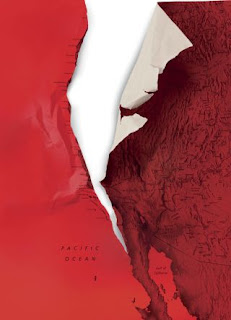 The illustration on the right is from The New Yorker. In the July 20, 2015 issue, Kathryn Schulz published her article, "The Really Big One," under the magazine's subheading, "Annals of Seismology."

The article, which attracted a great deal of attention, can be summarized as follows: "An earthquake will destroy a sizable portion of the coastal Northwest. The question is when."

I advance my "Two Worlds Hypothesis" as a helpful way to think about reality. At least for me, there is a benefit in understanding that the World of Nature, upon which all life ultimately depends, is beyond our human command. I think it's good to remember that, and to understand, therefore, that our best option, in the world that we create, is to live within the limits imposed by Nature.

Respecting the limits imposed by Nature, however, is only the first insight that can be gleaned from the "Two Worlds Hypothesis." While we need to respect the limits applicable in the World of Nature, we need simultaneously to remember that there are essentially no limits to what we can do by way of the arrangements we make within the world that we create. Within that "human world," the world in which we most immediately reside, anything is truly possible. We can tax the rich. We can change the definition of marriage. We can regulate and control land use. The list goes on. What we cannot do is to alter the natural laws that govern the World of Nature into which we are so privileged to have been born.

The Cascadia subduction zone, discussed in Schulz's article, "runs for seven hundred miles off the coast of the Pacific Northwest, beginning near Cape Mendocino, California, continuing along Oregon and Washington, and terminating around Vancouver Island, Canada." This is one of those facts of Nature that is not susceptible to change by human activity. The existence of the Cascadia subduction zone, as a feature of the Natural World, leads inevitably to the conclusion already mentioned: "an earthquake will destroy a sizable portion of the coastal Northwest." The question is only when.

What we do in the coastal Northwest, whether we continue to populate that place, or begin a strategic withdrawal, is totally up to us. Where we decide to build our cities, and how and where we decide to construct our human civilization, is not preordained.

I was interested to learn, therefore, from an article in the March 7, 2015 edition of The New York Times, that the virtual world of "cloud computing" has its largest physical presence in the coastal Northwest, where the Cascadia subduction zone will, one day, pretty much destroy everything that humans have located there.

The Times article wasn't about earthquakes. It was titled, "Tech Companies, New and Old, Clamor to Entice Cloud Computing Experts." According to the article, "Seattle and its surrounding towns are a hot spot for this kind of tech talent because they are home to A.W.S., which runs the biggest cloud computing service, and Microsoft, which has a large cloud business called Azure. Google also has a cloud computing office in the area. So does Facebook," and this list doesn't even count Amazon, which is also Seattle based.

I believe that my "Two Worlds Hypothesis" is a helpful way to think about reality. The reality is, we are more and more turning our human world into a "virtual world," which we access through the Internet. That world, though, like every part of what we do within the human realities that we construct, is ultimately dependent on the realities found in the World of Nature.

And in that world, an earthquake is going to destroy a sizable portion of the coastal Northwest, and with it our "virtual" reality.

The question is only when.