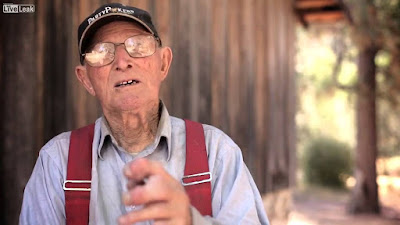 The Santa Cruz Sentinel posted a lovely obituary on March 9, 2016, celebrating the life of Jack English. The headline on the article was "Death of an outdoorsman: A remote Ventana cabin was ‘home’ for 96-year-old Jack English."

Click that link to read the article. If you click the next link you'll be directed to a short little video that features Jack English, which is where I snagged the photo at the top of this posting.

Jack's son, Dennis English, is quoted in the Sentinel obituary:

My dad decided that nature is in charge, has always been in charge and mankind forgot about it. He didn’t want to be part of that.


This is a statement worth thinking about! I like to point out, as I describe my Two Worlds Hypothesis, that the World of Nature is the world upon which we ultimately depend. If we are talking about our ultimate dependence on nature, I absolutely agree with Jack English. "Nature is in charge." We forget that at our peril. And, as Jack English says, we seem to have forgotten.

On the other hand, we (meaning human beings in general) do not live, immediately, in the World of Nature. We can't. There just isn't enough Nature to go around, for one thing. The current population of the world is in excess of seven billion people. Pine Valley can't accommodate them. We live, as we must, most immediately in a world that we create, a "human world" that we sometimes call "civilization," and that is, as Bob Dylan says, a "political world."

While we do live most immediately in a human world that we create, our human world depends on the World of Nature for its continued existence. That's the point that Jack English was making as he relocated his life to Pine Valley.