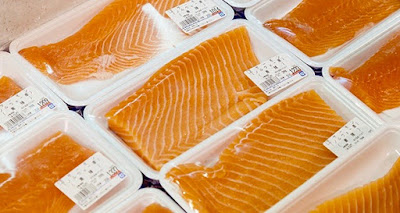 It is not too difficult to find evidence that my "Two Worlds Hypothesis" can be a helpful way to think about the nature of the reality (or realities) that we inhabit.

The world we create, the human world, the world that we most immediately inhabit, is constructed "within" the World of Nature, and is totally dependent on that Natural World.

Why is this such a difficult thing to understand? We act as though our human arrangements are sacrosanct, and can never be changed, but that the World of Nature, and its requirements, can be ignored at will.

Check out the image above. It's fish. It's salmon. It's salmon caught in Puget Sound, and a recent news article says that it is filled with more than eighty different drugs, including cocaine, antidepressants and dozens of other medications used by humans - and created by humans.

What we are doing in "our" world (creating and then disposing of drugs by allowing them to be dispersed into the natural environment), is affecting the World of Nature, and since our lives depend on that world (that's where our food comes from) this behavior is contraindicated.

Remember (it's not that difficult to understand) we can change what we do in the human world that we ourselves create. The World of Nature works according to its own laws, and we are not in charge of those.

When fish (in the World of Nature) become contaminated with cocaine and antidepressants (products of the human world), it's time to start working on making that change!