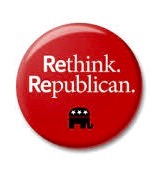 Peggy Noonan was a speech writer for President Ronald Reagan. Her columns on politics now appear regularly in The Wall Street Journal. Noonan is feeling "shattered," as she confessed in one of her recent columns, by what she believes is the almost certain death of the Republican Party, as party elites lose out to Donald Trump, who is effectively mobilizing bigotry and ignorance under the Republican Party banner. As we witness the imminent demise of the Republican Party, Noonan argues that "something important is ending."

For Noonan, the important thing that is "ending" is the role of the Republican Party as a responsible "vehicle of a philosophy, [a philosophy that might be called] conservative political thought - no more, no less."

My own judgment is that the Republican Party has long ago ceased to be a responsible advocate for "conservative political thought," and has mainly functioned, since President Reagan, as the political mechanism by which the military, economic, and social interests that seek the unbridled preeminence of corporate and oligarchic power attempt to solidify their political control over the wealth of the nation.

To the extent that the Republican Party was, and is now no more, a principled advocate for "conservative political thought," I would have to agree with Noonan that something valuable has been lost. The "conservative" political perspective should have an effective and responsible advocate to carry forward the debate in favor of that philosophy, since discussion and debate, and conflict and controversy about fundamental social, political, and economic objectives, should be at the center of any healthy politics.

Unfortunately, from my point of view, something has been lost on the other side of the philosophical spectrum, too. In my opinion, the Democratic Party has faltered in discharging its duty of being a consistent and effective advocate for a "liberal" philosophy, and has inadequately represented the interests of ordinary people, which is the role that the Democratic Party ought to play in the debate and discussion that is the essence of any functioning politics. The rot and corruption spread by money and corporate power, while centered in the Republican Party, has quite obviously infected the Democratic Party, as well.

On the Republican side, the voters following Trump have (correctly) noticed that the Republican Party leaders who said that they were working on behalf of the people have, in fact, been working consistently against them. The "trust" issues that Hillary Clinton is seeking to overcome really stem from the same concern among Democrats. Are party leaders in Congress and in the Administration really working for the people? Are they, to the contrary, more interested in their own personal advancement, symbolized, in Hillary's case, by the obscene speaking fees she sought and obtained from what her opponent calls "the billionaire class?"

While it is fascinating to watch, and to speculate about the reasons for, the slow motion political train wreck that is playing out in this year's Presidential elections, I think we all should be less concerned about describing the symptoms of our affliction, and more focused on figuring out a cure for the degenerative disease that has become contemporary politics in the United States.

What we need, it seems to me, is actually something that could properly be called a "political revolution."

That emphatically does not mean killing people in the streets. That does not mean that the government takes over everyone's private assets.

What it does mean is that we, whose interests are supposed to be represented by elected officials, must organize ourselves, and develop our political power, to the extent that we can successfully demand and insure that the elected officials who are supposedly working for us, actually do the things that will achieve what we want.

The "Party," as a political mechanism, can't be trusted to advance a program that truly benefits ordinary people. The "government" isn't going to do that for us, either. We are going to have to get involved ourselves.

That is, after all, the only way that self-government can work.