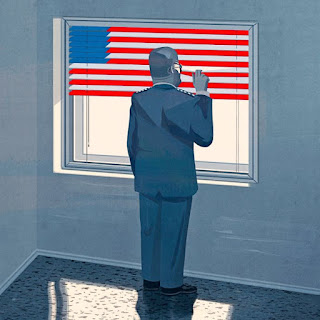 George Packer, staff writer for The New Yorker, has written a review of a recent book by former C.I.A. chief Michael Hayden. Hayden retired from the Air Force as a four-star general, and he then headed the National Security Agency before being given, concurrently, his post at the C.I.A.

Hayden's book is called Playing To The Edge: American Intelligence in the Age of Terror. Packer's review is titled, "Can You Keep A Secret?"

The last paragraph of Packer's review is what most captured my attention. Packer suggests that our relationship with the nation's spy agencies is a lot like the relationship that exists that between teenagers and their parents:

We expect the intelligence people to keep us safe, we resent them for their intrusions and their failures, and we need to believe that they know better than we do in spite of all the evidence to the contrary.

That last observation strikes me as stating what is actually a general rule, with applicability way beyond our relationship to the nation's spy agencies.

All too often, we decide that the government "knows better." In fact, a great deal of evidence points to the fact that government officials often do NOT "know better" than we do.

We would be wise, I think, to assert ourselves more, and to defer to government officials, and their proposals, a whole lot less.

A particularly good time to remember this lesson would be the next time that some politician (or President) tries to say we need to go to war.