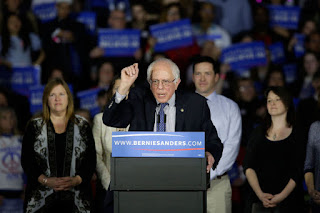 John Cassidy, a writer for The New Yorker, has just deconstructed the meaning of the Democratic Party caucus results in Iowa. I think his article is worth reading.

Cassidy's article is headlined by a claim that "Bernie Sanders just changed the Democratic Party."

I am not sure that this claim about changing the Democratic Party is actually true, but I do think that the basic point that Cassidy makes is right on target.

Bernie Sanders is running a campaign that holds out the possibility of real, positive political change. Barack Obama did the same thing, in 2008, building his successful drive for the Presidency on the promise, "Yes, we can!"

Hillary Clinton, so far, seems to be running with a program that tells primary voters, "No, we can't."

Take it from Robyn Morton, a blogger who has reacted badly to this "No We Can't" appeal.

It's not easy, but we can change the world.

Don't let anyone (including political candidates) ever tell you we can't!