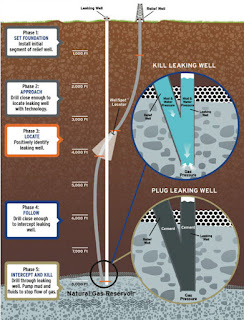 An "unstoppable" California gas leak is now loading the atmosphere with massive amounts of methane, a greenhouse gas that has effects that are seventy-two times more powerful than carbon dioxide. The leak is being called the worst catastrophe since the BP spill. If you haven't yet read about this, click the link. This is truly a catastrophe of huge proportions. The illustration, above, depicts a "potential" fix, but whether that will work out is "dubious," the article says.

The uncontrolled, and so far uncontrollable, nature of the gas leak in Alison Canyon reminds me of the continuing escape of nuclear radiation from the failed Fukushima nuclear plant. The bad news about that situation continues. The BP oil release in the Gulf of Mexico is, indeed, another example of how systems thought to be "fail safe" turn out to be anything but.

The fact that Southern California Gas has said that they are "deeply sorry for the frustration" that this environmental nightmare has caused does not seem commensurate with the scale of the disaster.

It is way past time for that Power Shift! No more hydrocarbon combustion!