#3 / The Tough Truth About Affordable Housing 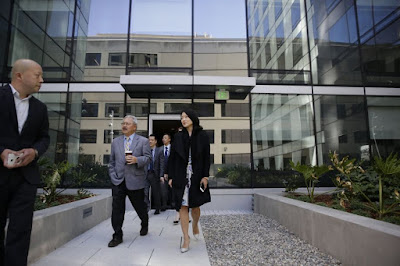 Here is San Francisco Mayor Ed Lee. He is arriving at an opening celebration welcoming new residents to affordable units at 1400 Mission Street. This event was documented in the San Francisco Chronicle's "Insight" magazine. In an article titled, "Bay Area must fight runaway housing costs," Armando Carbonell and Rick Jacobus talked about the problems that cities have in ensuring that at least some of the housing in the community can be afforded by a person with an average or below average income.

The article pointed out that the City's inclusionary housing program was having some success. I don't know details of the program in San Francisco, but I do have some experience with inclusionary housing from my twenty years on the Board of Supervisors in Santa Cruz County.

Measure J, the growth management measure I wrote, adopted by the voters in 1978, called for 15% of all newly constructed housing to be affordable by a person with an average or below average income. That "inclusionary" housing was to be constructed as part of each new development, thus making sure that housing for lower income people would be "included" whenever market rate housing was built. According to the article, San Francisco sets a 12% inclusionary requirement, which strikes me as low. Frankly, 15% is too low, too, but that percentage was set in 1978, a long time ago, when Santa Cruz County was out on the leading edge in demanding that affordable housing be made part of each major new residential development.

The three factors of most importance in an inclusionary housing program, in my opinion, are (1) the percentage of each new housing development that must be sold to qualifying buyers at an "affordable" price, which is to say a "below market" price; (2) the length of time that resale restrictions will be in effect, maintaining that affordable price; and (3) whether those developers who are constructing residential developments can escape the "inclusionary" requirement by paying a fee, instead of actually building the number of housing units that the percentage requirement would demand, and "including" them in the new development.

Here's the tough truth. As long as housing is a "market" commodity, poor people, and middle income people, will simply be driven out of the market, because those with more money will buy the units available. The only thing that works is "price control." A strong inclusionary housing program can provide that, but even if the percentage requirement is set "high," instead of "low," and even if the term that affordability must be retained is "forever," instead of a ten or fifteen year period that is often used, and even if developers are never allowed to pay fees, and must actually build the housing, an inclusionary housing program will never be able to meet the community's needs. That's because it only operates to create a small number of units in "new" developments. Most housing already exists, and the price is set by a market that drives lower income people out.

The government, acting on behalf of the public, must purchase existing housing, especially when the public can get a good deal on quality housing that is, for whatever reason, available at a relatively low price. Then, the government can sell that housing back onto the market with a resale restriction that will establish a "price controlled" property that will remain affordable indefinitely.

This is what some people would call "socialism."

When, in 2008, the banks all were going bust because of the collapse of the housing market, and the banks ended up with hundreds of thousands, if not millions of homes the value of which was much less than the value for which they were sold originally, the government could have taken back those properties in return for the bailout provided.

But the government didn't do that.

We missed a chance.

Next time (and there will be a next time, don't you think?) let's not make that mistake again.