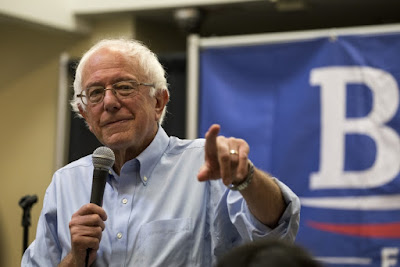 I think I must have read Rules For Radicals shortly after its publication in 1971. I loved it! The book is by Saul Alinsky, who died in 1972. Alinsky's book is a classic manual for political organizers, and it has continuing relevance. That contemporary relevance is evidenced, among other things, by an article in the December 2015 edition of In These Times, entitled "Bernie's Rules for Radicals." At least, that was the title in the hard copy version.

The article from In These Times quotes Alinsky to the effect that his aim is "to suggest how to organize for power: how to get it and to use it." That's what Sanders is attempting, too.

It is our American belief that "power" derives, ultimately, from "the people."

"We the people" have power initially, and we grant some limited measure of that power to the government, to act on our behalf. Maybe Alinsky should have said that his purpose was to suggest how we can "get our power back."

The way that the people can get power, in order to use it, the way we can get our power back, is to engage in politics. There is no other way. This is what Sanders is calling his "political revolution." The In These Times' article puts it this way:


What makes Sanders a radical, and what constitutes the essence of his revolution, isn’t his commitment to certain spending priorities or a particular economic plan—it’s his fierce commitment to democracy.


Bernie's "Rules For Radicals." Maybe only a single rule. It's pretty simple. Get engaged!

Let's take our power back.