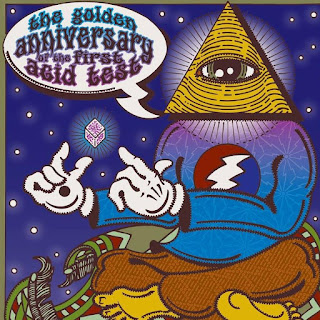 Thanks largely to great advance work by Santa Cruz County Supervisor John Leopold, who is apparently responsible for the graphic above, as well as having made arrangements for most of the festivities, the local Santa Cruz County community got to celebrate the 50th year anniversary of the first "Acid Test," which was held fifty years ago on a piece of land called "The Spread," in Soquel, California. Good Times, a local newspaper, carried a front page article by Geoffrey Dunn, documenting the celebration and the events that were celebrated. You can click right here for a video that documents some of the festivities that took place during the 50th year anniversary.

The actual Acid Test took place on November 27, 1965. The anniversary festivities, which took place in early December of this year, included musical performances, a visit to the actual site of the Acid Test, and a book reading by Lee Quarnstrom, who became a well-respected reporter for the San Jose Mercury News, which is how I knew him. In his reporter role, Quarnstrom covered Santa Cruz county government, among his other beats, but he began his connection with Santa Cruz County as one of the "Merry Pranksters," pulled into the orbit of writers Ken Kesey and Neal Cassady. Those were "Beats" on a different drum. Quarnstrom's book, by the way, which I have mentioned before, is titled, When I Was A Dynamiter, Or How a Nice Catholic Boy Became a Merry Prankster, a Pornographer, and a Bridegroom 7 Times." It's a fun read, and the 50th year anniversary events were fun, too.

I mention these events because the bus in which the Pranksters toured the country, bringing the mind-blowing benefits of (the then legal) LSD to the attention of the entire nation, was named "Furthur."

That seems like a good word to head up a blog posting on the last day of 2015: