#343 / For Entertainment Purposes Only? 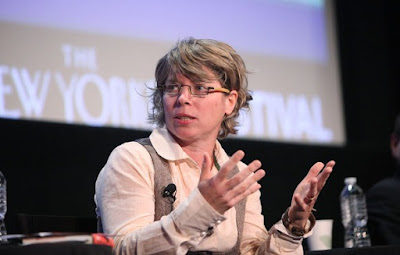 Jill Lepore, pictured, is a staff writer for The New Yorker. She is also the David Woods Kemper ’41 Professor of American History at Harvard University. Lepore is always worth reading, and I am recommending her latest article, "Politics And The New Machine," which appeared in the November 16, 2015 edition of the magazine.

In this article, Lepore takes on both polling and "data science," and speculates about their impacts on democracy. Among other things, she discusses a 2014 report prepared by a task force established by the American Political Science Association, titled "Improving Public Perceptions of Political Science's Value." She quotes Arthur Lupia, the lead author, to the effect that horse-race polls should be labeled, "For entertainment purposes only."

One example of the kind of polls she is talking about are the polls that have recently been naming Donald Trump, or Ben Carson, as frontrunners for the Republican Party Presidential nomination.

"Entertainment" is exactly what the debates and the candidates' campaign statements provide. Neither of these frontrunners is willing (or perhaps even able) to demonstrate any coherent grasp of what it might mean actually to be President. Trump, for instance, seems to think that Presidents "reign."

While Trump and Carson are clearly not up to the job, they certainly do provide a perverse variety of "entertainment value," as can be seen by the whoops of the partisan crowds they are galvanizing with their outrageous statements, and in Carson's case with his smarmy Bible quoting. Heck, these two men are entertaining even to the horrified Democratic Party faithful, who savor their obvious inadequacy as genuine Presidential candidates.

If horse-race polling is useful only for entertainment purposes, as Lupia claims, it makes a certain amount of sense that those who lead the polls on the Republican side are the candidates who are most "entertaining."

The "serious" issue raised in Lepore's article, however, doesn't have anything to do with the "clown show" aspects of the Republican Party Presidential debates and associated campaigns. In fact, Lepore puts her finger on a very profound question. If polling could accurately tell us what the public thinks, (much to be doubted, Lepore makes clear), should our elected representatives then discharge their offices by attempting to effectuate, as policy, what the polls say that the people want?

Having been an elected official myself, I would argue that attempting to "follow the polls" is the surest route to horrible mistakes. After 9/11, there was almost unanimous public support for a "war on terror," which has turned out to be, among other things, a war against the civil rights of the American people, whose every phone conversation and email is now monitored by the government, and whose web searches are captured, and the locations to which they drive their cars catalogued.

In the United States Senate, in 2001, who voted "No" on the "Patriot Act?" Senator Russ Feingold.

Who did the right thing?

Not those who followed the polls!