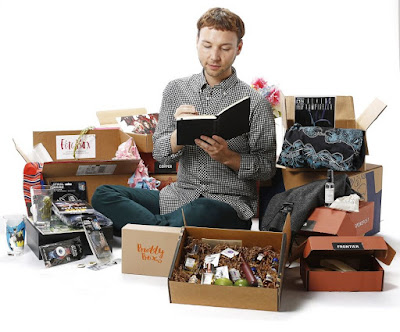 I guess that Loot Crate is still in business. At least, it seems to be. I did look it up on the Internet, and found this link. The concept, however, appears to have changed, at least a little bit. From what I can tell, instead of general goodies, the Loot Crate goodie box is now specially designed for those who hanker after "Mystery Geek & Gaming Gear."

The Loot Crate idea, which I disparaged in a blog posting in December of last year, is that people will subscribe to receive a monthly box of "goodies," none of these goodies being items for which the person subscribing has any specific need or demonstrated desire. The need or desire is much more general: I just want to consume!!

I must say, however, that the infection seems to be spreading. In the November 15, 2015 "Style" section of the San Francisco Chronicle, Tony Bravo authored an article titled, "Life Upon Delivery." Online, the title is, "Can man live by box alone?" As it turns out, Loot Crate is just the tip of the iceberg. Bravo lists at least thirteen different "box services" that provide subscribers with what amounts to a life guided into "curated consumption."

I continue to disparage and deplore the curated consumption movement, with the exception of those subscription boxes you can arrange to receive from various farms participating in the Community Supported Agriculture (CSA) movement.

Signing up with a farm, to receive regular boxed deliveries of healthy food, makes sense to me. We all have to eat. In other words, the item subscribed for is an actual necessity of life.

By definition, the box services listed by Tony Bravo provide a monthly subscription for deliveries of things you don't specifically need, since you don't even know what you'll get in the box.

And if afflicted by consumptionism, watch that video!