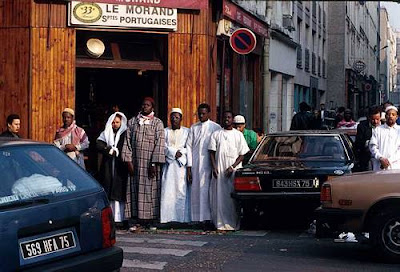 I very much appreciated an article in the December 3, 2015 edition of The New York Times.

The "Critics Notebook" story, by Michael Kimmelman, was titled a "Paris Street Spared in Carnage Embodies What Attackers Loathed."

This street in Paris, Rue Jean-Pierre Timbaud, demonstrates the kind of diversity and liveliness that we should wish could be found on the streets of all cities, everywhere.

The Omar Mosque, pictured above, and located on Rue Timbaud, is right around the corner from where the terrorists attacked. Not shown is the banner, mentioned in the story, that now hangs across the front of the Mosque:

Not in My Name

That was the part of the story that I liked most.

May God bless the worshippers in the Omar Mosque, on Rue Timbaud. May God bless devout worshippers everywhere, in Churches, and Synagogues, and in other Mosques, in Paris, and in the United States, wherever they may be gathered.

And let me add this picture, depicting a United States drone strike in Syria: 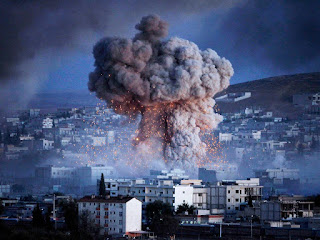 And let me say (will you join me in saying?):

Not in My Name