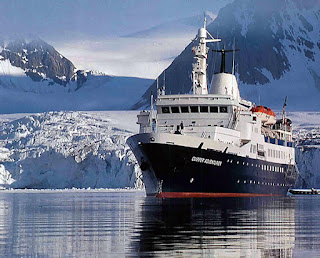 The November 9, 2015 edition of The Nation includes a heartbreaking article entitled, "Tourists At The End Of The World." If you are going to visit the Arctic, to appreciate it before (and as) it disappears, I guess you might as well go in style, on one of the luxury ships operated by Adventure Canada.

Or maybe not. Roy Scranton, who authored the article, and who writes a blog for The New York Times that he calls Opinionator, obviously felt guilty about taking a trip to see the results of global warming on a luxury ferry that burns 10 to 20 tons of hydrocarbon fuel each day.

I think the article was properly titled. The "End of the World," not the "End of the Earth," is what Scranton  saw and described. As his ship sailed through Coronation Gulf towards its final destination, Scranton was "overtaken by the realization that what I'd come to see was already gone. The Arctic was changing in response to global warming faster than anywhere else on Earth, and by the time I'd gotten there, it had already been through the hottest years and the most precipitous declines in sea ice ever recorded."

Here is what I thought was Scranton's most poignant observation:

Geologists, scientists, and other thinkers have advanced the idea that the Earth has entered a new epoch, one characterized by the advent of the human species as a geological force. They’re calling this epoch the Anthropocene. Some thinkers suppose this idea implies that we have advanced beyond Nature, that the world is now completely human, but while they grasp the truth that we’ve left behind the Enlightenment’s division between Man and Nature, they’ve grasped that truth by the wrong end. The Anthropocene implies not the supersession of “Nature” by human civilization, but the opposite: the reduction of human civilization to the status of a fossil. On a geological time scale, we’re just another rock.


It is the World of Nature upon which we ultimately depend.