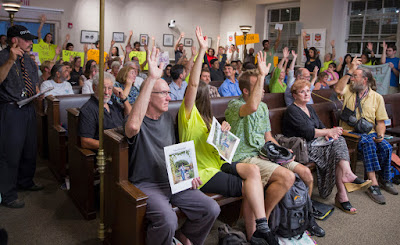 In June 1975, I was a brand new member of the Santa Cruz County Board of Supervisors. During the budget sessions held that month, our Board was asked by a group of community members (who looked a lot like the group in the photograph above) to use our governmental powers, as representatives of the public, to rearrange the County's budget priorities and to fund community based programs providing direct services to the people of Santa Cruz County.

That had never been done before. The County Administrative Officer and his staff were dead set against it. But by a series of 3-2 votes (and I'm proud to say that I was one of the three), our Board shifted $1.2 million from expenditures recommended by the County staff, largely various kinds of fixed asset acquisitions, to redirect those expenditures and to respond to what the community was asking for.

The picture above is much more recent. It was taken on October 13th, and this crowd is shown in the Chambers of the Santa Cruz City Council, where they had come to ask the Council to take whatever actions were necessary to preserve the Beach Flats Community Garden.

Today, Tuesday November 10th, the Santa Cruz City Council will be meeting at 2:00 p.m., and the Council will be deciding how to respond to the people shown above. The City has been offered a deal by the Seaside Company, which owns the land on which the garden grows. Here's the deal: a garden pruned down to two-thirds its present size, and with just three more years guaranteed.

I know, since I had the experience in 1975 of casting my vote for what the community wanted, that what the community is asking of the Council is to do something that is very hard for an elected official to do. It's not easy. It's not in the current fiscal "plan," but the City Council can do it, if they want to.

Will they want to? That's the question.

Carol Long, who lives in Santa Cruz, authored what I thought was a wonderful commentary in the November 7th edition of the Santa Cruz Sentinel. Her article was titled, "City needs to take next step and buy Beach Flats garden." Click the link to read what she wrote.

We create the world we inhabit by the choices we make. Elected officials have the tough, but very satisfying job of responding to what the community asks them to do, and to make tough choices on the community's behalf. It's a privilege and an honor to respond.

Council Members: It's Tuesday. It's November 10th. We've just had a pretty good shot of much needed rain.

It's a good day to buy a garden!