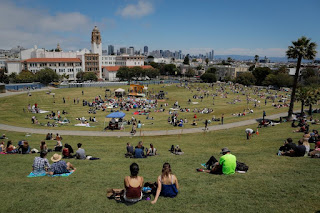 Dolores Park is located in San Francisco, and is pictured above. Matt Mahan reports that on Sunday, October 25th, he spent the day in Dolores Park, talking to strangers about politics.

Mahan serves on the Board of Directors of the Silicon Valley Leadership Group. He is also President and CEO of Brigade.com, which claims that "democracy starts when you take a stand." Mahan's report on his activities in Dolores Park appeared as an "Open Forum" column in the Thursday, October 29, 2015 edition of the San Francisco Chronicle.

Mahan believes that we are living in a time of "democratic doldrums," and that causative factors include: "the outsize influence of money; the fact that information is not sufficiently accessible, consumable or actionable; and a lack of transparency and tools to create feedback between voters and elected representatives."

Brigade, Mahan's company, is his idea of how to fight off the doldrums. It is a larger scale version of Civinomics, the Santa Cruz-based effort to improve civic participation by providing a place where people can record their political views, so others can see them. Brigade, which ties directly to Facebook, is based on the same concept, and Mahan suggests that Brigade, and similar efforts, will make it possible to "leverage the Internet to rebuild local relationships and create a new culture around civic participation."

It is my view that democracy does not start when "you take a stand" by posting your opinion on some issue on an internet site. Democracy begins when real flesh and blood individuals join together in a serious and organized way to force the political system to deliver the actions that the majority of the people want.

You can't put in an order for "democracy" the way you can buy a book from Amazon. You can't click on what you want and expect to have it delivered within the week.

Democracy is actually a matter of mobilizing the power of ordinary people to make their government, and their governmental representatives, do what the majority desires. It's not that easy, either.

Sure, we can all "take a stand" on the Internet; we can sign an online petition; we can "Like" a cause; and  we can "Share" our status. None of that hurts. But please don't believe that we can achieve any kind of effective democratic politics over the Internet.

On the streets, yes! In Dolores Park, sure! But real contact with real people. And not just once!