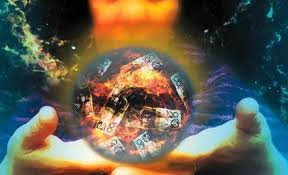 Last Sunday, November 1st, the Santa Cruz Sentinel ran an article on financial planning. Written by Stephen Butler, the founder and CEO of Pension Dynamics, an employee benefits consulting firm based in Pleasant Hill, California, the article was titled "Trying to predict the future is a waste of time."

I am not going to provide any retirement advice, but I liked Mr. Butler's title. During the twenty year period I spent on the Santa Cruz County Board of Supervisors, one of the biggest challenges facing our community was the challenge of convincing ourselves that we did not have to let the future "happen to us," but that we could actually make the future be the way we wanted it to be.

An approach to the future that sees it as something that is beyond human control is a prescription for passivity. That view of the future as an "inevitability" is what leads us to try to predict it. But trying to "predict" the future is, as Mr Butler says, a "waste of time." Our challenge is not to become good at extrapolating current trends to see where they're going, so we can adapt accordingly. Our challenge is to decide where we want to go, and then to take the concrete steps that can get us there.

My biggest focus, as a County Supervisor, was helping our community to deal with a pattern of runaway growth that was taking Santa Cruz County in a direction that the community, in fact, did not want to go. When I took office, Santa Cruz County was the fastest growing county in California, and the fifth-fastest growing county in the United States. We were going to have urban sprawl from Watsonville to Santa Cruz, and from Santa Cruz to Boulder Creek, and from Santa Cruz to the Summit, not to mention a paved-over North Coast.

That was what any reasonable "prediction" of the future told us was coming. But the community did something about it.

Measure J, the set of growth management policies adopted by the voters in June 1978, represented a community choice, and was based on an idea that we would make the future be what we wanted it to be, instead of wasting time watching the future "happen to us," and watching that future destroy the integrity of our local community in the name of inevitable "progress." If you're not familiar with the "Story of Measure J," you can read about it by clicking the link.

I don't profess great expertise in retirement planning, but I do know the right way to approach the future, and it isn't by "predicting" what the future is going to be.

The right way to approach the future is by making the future be the way we want it to be, by the choices and actions we take today.

And this kind of approach to the future is not, let me emphasize, limited to the arena of land use policy!