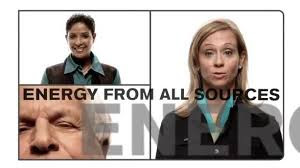 Coming from where I come from, politically, the most recent Republican Party Presidential Debate was disheartening. I watched it, though. If you didn't watch it, and you want to, you can still do so. It's online and available on the CNBC website. Just click this link.

Perhaps more disheartening than the debate itself, at least for me, was an advertisement that appeared during the debate, in one of the several advertising breaks in CNBC's political programming. The ad was titled, "Energy Voter." Click right here to watch it.

Sponsored by the American Petroleum Institute, the "Energy Voter" ad claimed that "American Energy" would make the nation more secure.

"American Energy" means (exclusively, it appears) oil and natural gas. According to the ad, as oil and natural gas are produced in greater quantity the result will be "abundant" energy, "affordable" energy, and more "jobs, opportunity, and economic growth."

Here's the kicker: more "American Energy" is supposed to be good for our "children and our grandchildren." That's what the ad says. That's why the nice African American woman who appears at the end of the ad wants to be an "Energy Voter."

The truth is, if we don't stop burning fossil fuels, specifically including oil and natural gas, our children and our grandchildren are going to have to deal with runaway global warming, putting the planetary environment and our human civilization in peril.

That kind of energy is not "American" energy. It's energy available to everyone, everywhere on planet Earth.

It's the only way we can make our future more secure.

It's the only way our children, and our grandchildren, are going to have a chance.