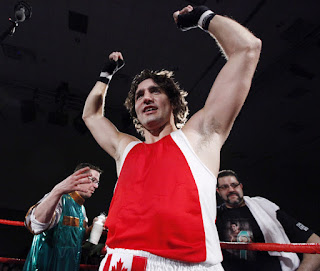 Pictured is the recently-elected Prime Minister of Canada, Justin Trudeau. If you click the link, you'll see that the Liberal Party of Canada wants us to see him as a "Teacher, Father, Advocate, Leader."

I'm willing to believe that Trudeau is all of those things. However, I think we should not overlook the designations applied by The New York Times. The Times celebrated Trudeau's recent electoral victory as "A New Trudeau Era in Canada," and called him out as a "boxer" and a "nightclub bouncer."

I don't think that The Times' designations were meant to imply that Trudeau is either personally belligerent or violent. But if he's "scrappy," on behalf of liberal values, I am going to count that as a plus!