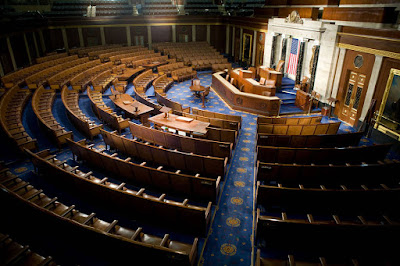 Christopher DeMuth, who was the president of the American Enterprise Institute for twenty-two years, from 1986 to 2008, is now called a "distinguished fellow." He works at the Hudson Institute. Both of these institutions may properly be called "conservative think tanks."

On October 19, 2015, The Wall Street Journal ran an opinion piece by DeMuth entitled, "The Decline and Fall of Congress." The subhead on the article pronounced: "The GOP Freedom Caucus is part of the atomized politics that has eroded most U.S. institutions."

Given the headline and the text of the subhead, I was hoping to discover that a recognized conservative thinker was making a heartfelt appeal to conservatives, urging them to adopt a different style of Congressional politics, to slow down or reverse what I think many would agree has been the "decline and fall of Congress."

While DeMuth did provide some criticism of the current conditions within the Congress, particularly critiquing them from a pragmatic point of view, and while he rather accurately identified the Republican Party's "Freedom Caucus" as being at the causative center of Congressional dysfunction, I didn't think that DeMuth very much, or adequately, argued against the style of politics perpetrated by Members of Congress on the far right.

Instead, DeMuth says that "members of the Freedom Caucus are not stupid or deranged; they are smart and calculating ... They are avid for Promethean drama and opportunities for personal display - even if, or especially if, they are crushed in the process and the Washtington establishment emerges stronger than ever."

DeMuth's concluding salutation to the "Freedom Caucus" sounded to me like a call to that group to do more, and to go even farther, if possible, in their efforts to disrupt the legislative process. Quoting someone named Patton (George S., not Gary A.) DeMuth paraphrased the former General:

I took that Patton paraphrase as an endorsement of the kind of approach currently being pursued by the "Freedom Caucus." It's all about "personal display," right? It's about winning an argument, as opposed to making any positive changes for the country as a whole.

Properly identifying the genuine decline and fall of the Congress, and understanding that what is going on is leading to the erosion of our civic institutions, it's apparently DeMuth's advice to right wing Members of Congress to keep it up! To continue to  play "chicken" with the fortunes of the country and the integrity and continued existence of democratic self-government.

Color me disappointed with this "distinguished fellow" from the right.