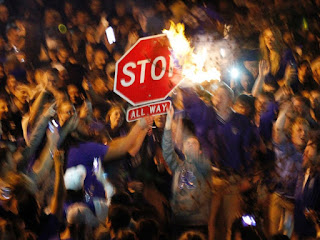 On October 16th, I wrote about a theory that Malcolm Gladwell has evolved to help explain a demonstrable increase in school shootings. Gladwell sees this particular social behavior as following a kind of "law of thresholds" that was derived, at least initially, or at least partly, from the study of riots by sociologist Mark Granovetter. If you'd like to read something from one of the sources relied upon by Gladwell, you can click the link for a copy of Granovetter's article, "Threshold Models of Collective Behavior."

As anti-social behavior by one or several persons is observed by others, their personal "threshold" for participation in such anti-social behavior is reached, and they join in. A "riot" is a group or collective phenomenon that depends on members of the public, in general, being exposed to behavior that they would never initiate on their own, but in which they will participate, as they see it happening around them; individuals will move from observation to participation as their own threshold for such activity is reached.

I have long believed that in our human-created world, literally, "anything is possible." We each learn about our personal possibilities, and about the dimensions of our collective possibilities, by looking at what actually happens in the world we see.

When we see school shootings as "normal," or "expected," when we see riots in the heart of our cities, our expectations change, and our thresholds are reached, and that expansion of what we believe is normal, or expected, allows the "unthinkable" to be thought about, and then to be acted upon, and to be accomplished. Seeing what is happening around us tells us what we should expect to happen, and helps to bring into reality events and activities that cannot become real without our expectations having first been changed to accommodate them.

We need, in other words, to be thinking about how we can help initiate a "good riot," a set of collective behaviors that will induce us, each one, to leave our normal, individual existences behind, and not for the purpose of destruction, but to create and build a better world, a world that elevates and sustains our human lives, and that respects and and reverences the World of Nature that sustains our existence.

I'm thinking about how to help initiate a "good riot."

You may say that I'm a dreamer.

But I'm not the only one.