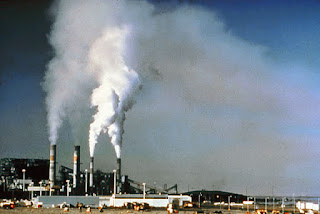 The picture above comes from a posting on the Resilience website.

In an article entitled "Duality in Climate Science," Kevin Anderson discusses how he thinks the world should be addressing the global warming challenge. Anderson is a professor of energy and climate change in the School of Mechanical, Aeronautical and Civil Engineering at the University of Manchester. He was previously director of the Tyndall Centre for Climate Change Research, the UK’s leading academic climate change research organization.

In his article, Anderson suggests that scientists are giving the public a false sense of security, insofar as scientists and scientific organizations suggest that "evolutionary" approaches can deal adequately with the global warming challenge. The text below is what most caught my attention:

June’s UNFCCC Bonn Conference reiterated the headline "conclusions" of November’s IPCC Synthesis Report, which itself was heralded as delivering clear messages to policy makers. As the Financial Times noted, meeting the 2°C dangerous "limit" would “only cause an annual 0.06 percentage point cut in … economic growth,” a small cost that would, according to the UK’s Guardian, rise by less than 50% even if emissions reductions were delayed to 2030. In similar optimistic vein, The US Associated Press and Hindustan Times reported that maintaining “the temperature rise below a level that many consider dangerous” may require emissions from fossil fuels “to drop to zero,” but not before “the end of this century.” The Sydney Morning Herald concluded that staying below 2°C would require “a fairly strong level of action on greenhouse gas emissions” with China Daily reporting that in delivering the requisite action “the solutions are many and allow for continued economic and human development.”

Based on such reports it is easy to be left with the impression that the shift away from fossil fuels needs to be much more an evolutionary transition than an immediate revolution in how we use and produce energy (emphasis added).

Anderson is urging an "immediate revolution" in how we use and produce energy. This sounds right to me. "Evolution" is mostly about change that happens to us, that we experience from the outside. "Revolution" is about the changes we make ourselves. Revolutions occur when human beings make new choices, and act in new ways.

If we want to meet the challenges of global warming, we need to take direct, immediate action. And "immediate" means "now."