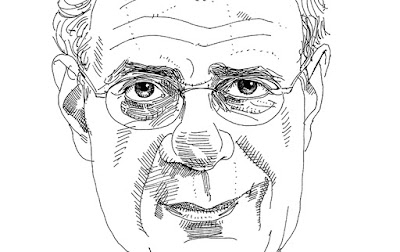 Scialabba is the author of a bon mot now widely attributed to Einstein: "Imagination is only intelligence having fun." He has been writing book reviews and political essays for a long, long time, and his most recent book is called Low Dishonest Decades: Essays and Reviews, 1980-2015. Apparently, this book will soon be out from Pressed Wafer publishers. It is mentioned in The Nation as if it existed already, but I certainly couldn't find it online (therefore it can't exist, right?). A book I know does exist is another Pressed Wafer book, For The Republic: Political Essays, which was published in 2013. I have sent in my order!

Noam Chomsky (we do know who he is, right?) topped off the tribute to Scialabba by reading a proclamation from the Cambridge City Council, naming September 10, 2015 as George Scialabba Day, and declaring: "WHEREAS...George has spent thousands of hours pacing his apartment on Washington Avenue, gnashing his teeth over the sorry spectacle of American politics and the fearful mayhem of American capitalism...."

If you are pacing and gnashing, too, like I am, then maybe you ought to hunt down and read Scialabba's most recent book!