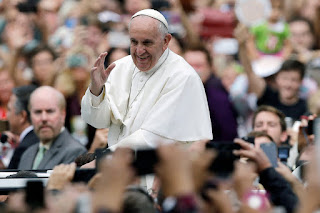 The president of the American Enterprise Institute, Arthur C. Brooks, has written a column published in the October 8, 2015 edition of The New York Times, entitled "The Pope's Subversive Message."

"Subversion" is what those Cold War Communists did, and it doesn't sound nice. Since AEI is an organization that speaks for the military-industrial complex, it wouldn't be any surprise to find the president of the organization in opposition to the Pope's call for an end to economic inequality, and for peaceful, not warlike, approaches to the resolution of global conflicts. In fact, however, it's actually hard to gauge what Brooks thinks about the Pope. Here are Brooks' last lines:

Many people around the world have found themselves attracted to the pope’s warm message of unity. And well they should be — unity is in short supply in our unhappy world today. But Francis is asking for more than a mass chorus of “Kumbaya.” He is in the hunt for the whole human soul.

Brooks says that the central theme of Pope Francis' visit to Cuba and to the United States was a "call for unity," and I do agree that finding a way actually to achieve human "unity" would be subversive of the existing order. Brooks makes the following more or less theological observations:

Realizing that we are not just atomized "individuals," but that we "are living in one house, the world house," as Congress Member John Lewis puts it (and as I am pretty certain the Pope would agree) is a necessary first step towards any positive transformation of the current world order, built on our lack of unity and our prevailing division.

When we truly believe - when we know - that we are "in this together," then we will have a chance to make life and light win out over death and darkness.

And not until we do!