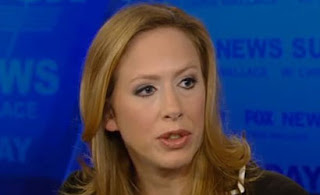 Kimberley Strassel (pictured), writes the "Potomac Watch" column for The Wall Street Journal, and she also appears frequently on the Fox (Non-News) Network. Strassel thinks Bernie Sanders should refund my rather modest contribution to his Presidential campaign. According to Strassel, Sanders committed "political malpractice" during the Democratic Party Presidential Debate held in Las Vegas on Tuesday, October 13th.

Specifically, Strassel contends that Sanders is "not in it to win," based on Sanders' statement during the debate that the voters are "sick and tired" of hearing about Hillary Clinton's "damn emails."

Strassel opines (and I think correctly) that "most of Mr. Sanders' low-dollar donors dug deep to send that $20 or $50 in the belief that their candidate is in it to win." But as far as Strassel is concerned, Sanders has clearly deceived his contributors, because that particular statement about the Clinton emails let Hillary off the hook, and that anyone who is a "serious" candidate should act like the Republican candidates, and engage in personal attacks and inflammatory statements on any convenient "gotcha" point that may come to hand.

Strassel, obviously, thinks she knows better than Sanders how to run a winning campaign, proving that she is just one more puffed up pundit, pretentiously proud of her own presumed, but never proven, greatness.

Maybe Strassel is right about how the email issue will play in the campaign, though I personally think she is wrong, and that Sanders' statement was, in fact, a very strong indication that he is thinking strategically, and is, indeed, "in it to win." What Sanders is saying is that Democratic voters should be focusing on the basic policy commitments of the major candidates, and that he is different from Hillary. If the voters do focus on those policy choices, they will realize that what is at stake, in the election next year, is the future of democracy in the United States. If the voters see it that way, Sanders believes that they will vote for him, but they are only going to do that if they truly come to understand that typical political potshots need to be set aside, and that what is required from us is that "political revolution" that Sanders talks about.

More direct engagement in politics by the people, taking back our power, is what counts now, and more "gotcha" politics will leave us politically becalmed in a Sargasso Sea of political stagnation.

Who knows how this campaign will go? Hillary Clinton did well in the debate. So did Bernie Sanders, at least in my opinion.

Pundits who think they know everything (puffed up and proud) are the ones committing "malpractice." Let's just hope the public doesn't get beguiled by statements like those of Strassel. Pundits don't vote. People do!