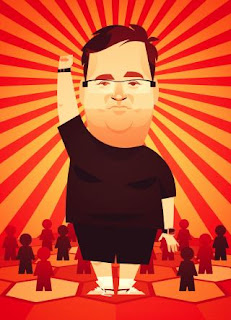 The October 12th edition of The New Yorker carried an article on Reid Hoffman. The article is titled, "The Network Man." The online edition of the magazine (at least at the time I wrote this blog posting) highlights the article on its home page as follows: "LinkedIn's Plan For World Domination." That description certainly conveys the tone of Nicholas Lemann's reporting.

Hoffman was the founder of LinkedIn, and still works there, plus running a venture capital firm called Greylock Partners. He has a net worth of $4.7 billion, and is ranked #341 on the list of the world's richest people. He is regularly invited to get together with President Obama, and has specifically been counseling the President on what he should do with his post-Presidency. If the article properly captures his personality, it appears that Hoffman evidences a self-satisfied assurance that he and his fellow entrepreneurs can pretty much take care of any problems that might confront us, economic, political, social, or otherwise. He does not, however, just to be fair, claim that he's got our back on global warming or the Syrian refugee crisis.

Hoffman and his friend Mark Pincus (head of the gaming site Zynga) seriously discuss how civic engagement can be "gamified," and Pincus thinks that he and Hoffman should simply set up a gaming approach to politics that will allow modest $1,000 online contributions from a million people to "buy the Presidency" for former New York Mayor Michael Blomberg. Again, to be fair, Hoffman apparently does express some reservations, but they're mainly along the lines of his thought that Blomberg wouldn't go along. No problem with the basic concept!

I guess you could say that I "enjoyed" this article, at least in the sense that I'm glad I read it. I recommend that you read it, too. These guys (and all their entrepreneurial buddies) do live right over the hill, and the force field of their immense hoards of money (and abundant sense of their own, personal greatness) is having a distorting effect on our political and social life right here in Santa Cruz, not to mention the impact that these immensely rich men are having on the national level.

Letting rich guys buy our government isn't my idea of what American democracy is all about.

Far as I'm concerned, self-government is definitely not a "game."