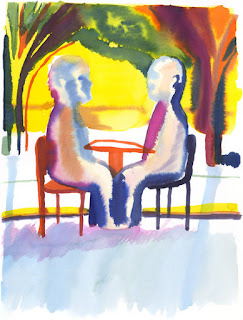 Sherry Turkle, who is the Abby Rockefeller Mauzé Professor of the Social Studies of Science and Technology at MIT, is urging us to "Stop Googling."

Turkle's article, making these suggestions, appeared in the Sunday, September 27, 2015 edition of The New York Times. And Turkle is pretty convincing (though I am not about to give up Googling cold turkey and completely).

What I found most compelling was the following observation from Turkle's article:

In 2010, a team at the University of Michigan led by the psychologist Sara Konrath put together the findings of 72 studies that were conducted over a 30-year period. They found a 40 percent decline in empathy among college students, with most of the decline taking place after 2000.

Turkle relates a plummeting decline of empathy among college students to the spiraling use of cellphones. Whatever the cause, empathy is precious.

In this life, we are given an inescapable assignment: we must live together or die. To quote again the words of Ellen Bass:

What would people look like
if we could see them as they are,
soaked in honey, stung and swollen,
reckless, pinned against time?

There we are. All of us. And it is empathy, that precious gift, that allows us to see our condition, and seeing it, to come together and survive.