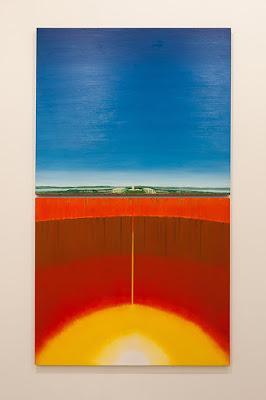 The artwork above, by Cildo Meireles, is titled Project hole to throw dishonest politicians in. I found it among a number of the artworks included in the 14th Istanbul Biennial “SALTWATER: A Theory of Thought Forms,” organized by the Istanbul Foundation for Culture and Arts. This exhibition opened on September 5, 2015. Click the link, above, to see more.

I was alerted to the exhibition by a reference in Amor Mundi, the bulletin of The Hannah Arendt Center for Politics and the Humanities, located at Bard College. Bard advertises itself as a "place to think," and while I am all for thinking, "thinking" is an activity that I would identify as "necessary but not sufficient." I know that Hannah Arendt would agree with me, too, since her political investigations into the nature of human freedom emphasized the ability of humans beings to "act," and by acting to create a whole new reality. As ever, I strongly recommend her book, On Revolution.

The article I read in Amor Mundi commented on an essay by Ari Akkermans, which "shows how artists have quickly become the lone source of public resistance to the Turkish governments. At a time when newspapers are attacked by mobs and the threat of terrorists is everywhere employed to justify repression." Akkermans writes as follows:

The main concern here, however, is not whether to lend support to free media, but to make sure it does effectively exist. It is the very same media that has labeled these events "anti-terror protests" that has become a victim of the same tactics of intimidation that have threatened minorities, journalists, and intellectuals for decades. The moment we no longer have a free press, anything can happen ... "If everybody always lies to you, the consequence is not that you believe the lies, but rather that nobody believes anything any longer," remarked Hannah Arendt [in an interview published in 1978 in the New York Review of Books], addressing lies in politics and concluding that, "A people that no longer can believe anything cannot make [up sic] its mind. It is deprived not only of its capacity to act but also of its capacity to think and to judge. And with such people you can then do what you please."

Akkermans asks (for Turkey) "Have we reached that point?" His answer: "Yes, but there is no certainty of what is yet to come in this country, on the brink of a larger conflict. Under so much pressure and heavy censorship, it has become increasingly difficult to write honestly about culture in Turkey and not hide behind the art, for the political climate has opened an abyss before us in which we are made defenseless. The time is up for those charades, catered to tourists, about Istanbul as the crossroads between East and West, on which the self-image of the city has fed for years. It is not possible or responsible to try to hide behind the art when there is so much at stake."

I have two comments, other than to recommend looking through the links, above:

First, I don't think the phenomenon spotlighted by Akkermans is restricted to Turkey. We who live in the United States need also to reflect on Arendt's observation that "a people that no longer can believe anything cannot make up its mind." Have we reached that point? I'm close to suggesting a "Yes," for our country, just as Akkermans concludes the same for Turkey.

Second: That hole for dishonest politicians probably needs to be bigger.