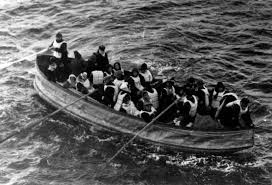 Zeynep Tufekci is a sociologist, and I have found many of her topical writings to be quite insightful. Recently, she wrote an article that proposed a new model for the "future of news and publishing." Her analysis (and recommendations) are well worth reading. However, I was most struck by what she identifies (after what she calls "the drumroll") as "collective action problems."

Collective action problems are challenges in which single actors have incentives to act selfishly instead of joining forces. Such self-preserving acts allow the stronger to survive a little longer. For a while.

In short, if we don't act together, collectively, if we continue to think that individual action is the way to address our future, we're doomed.

According to Tufekci, the passengers on the Titanic (most of them) spent time trying, individually, to reach the highest deck possible, to delay their inevitable encounter with the waters of the North Atlantic.

They could have worked, collectively, to launch lifeboats that, because of the lack of collective action, were never launched.

In general, the fate of the passengers on the Titanic is the fate of all of us, unless we can deal with those "collective action problems," and start working together!