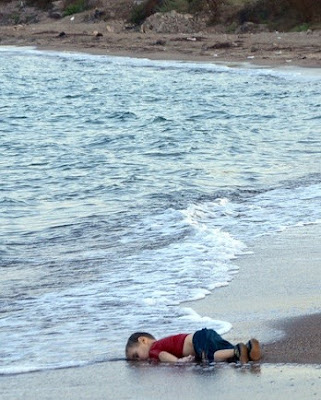 About a month ago, the picture above was omnipresent. This young boy, fleeing the war in Syria, came with his family through Turkey, where he, his father, his mother, and his brother then embarked on a rubber raft, heading for Greece. Only the father survived.

I have attempted to locate the source of the phrase, "all is fair in love and war." Here, at least, is one explanation:

The earliest known origin of the sentiment "all is fair in love in war" is found in poet John Lyly's novel "Euphues: The Anatomy of Wit," published in 1579. The novel recounts the romantic adventures of a wealthy and attractive young man, and includes the quote "the rules of fair play do not apply in love and war." The first known appearance of the quote worded "all is fair in love and war" is in English author Francis Edward Smedley's 1850 novel "Frank Fairleigh" about the life of a schoolboy.

There is nothing "fair" about what happened to this schoolboy/child.

There is nothing "fair" about war.

There is no way to stop this grim tide of young boys' dead bodies on the beach, to stop the pictures of of the bodies of blood-drenched women and children left to rot in the streets; there is no end to all this horror...

Until we put an end to war.