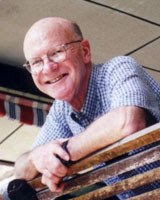 Pictured is Dwight Clark (no, not the American football wide receiver whose name comes up first in an Internet search). The Dwight Clark pictured here was the Dean of Freshman Men when I first appeared at Stanford University fifty-four years ago this Fall. This Dwight Clark is also (and deservedly) famous, but mainly for his creation of Volunteers In Asia, VIA, which has its own Wikipedia page. Check that out, or check out the VIA Website. Donations are welcomed - and appropriate!

In 1968, I participated in a VIA summer program. That is how I met my wife, Marilyn, by the way. She was in the program, too. Besides meeting Marilyn (which was, of course, the highlight of the trip for me), my VIA summer provided me with an incredible opportunity to teach English vocabulary to Chinese students in Macau, which was then still a rather sleepy Portuguese colony located near Hong Kong, but on the China mainland. The VIA summer program also included some extensive traveling in Asia.

Having just recently returned from some additional foreign travel (this time in Greece), I have had occasion to remember a frequent Dwight Clark advisory that was kind of a "theme" for the VIA 1968 summer program. This particular advisory provides very good guidance for those who travel, particularly when they travel in groups. In fact, though, I think of it as an important guideline for the good life, generally.

As our VIA 1968 summer group moved along rural country roads visiting schools, orphanages, and other such facilities, the group would sometime straggle. We had a schedule, and it wasn't too "flexible." Keeping to the schedule was important, and Dwight was in charge of making sure we showed up where we were supposed to be, on time!

As we walked in a too-leisurely fashion, behind the curve in terms of our schedule, Dwight would speed alongside, and then move on ahead of us, and I am reproducing below just what he said, as he passed.