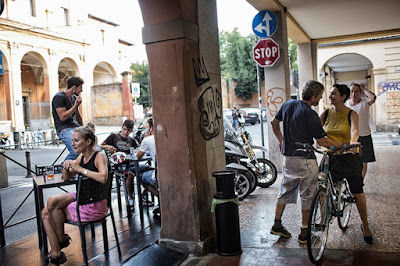 The picture above illustrates an article that ran in the August 24, 2015 edition of The New York Times. The article tells the story of two residents of the Via Fondazza, in Bologna, Italy, and how they turned their urban neighborhood into a more vital, lively, and human place, using the technology available to all of us through Facebook.

I am quite suspicious of anything that might lead us to think that we can substitute a "virtual" reality for our "real" reality. A number of my non-Facebook-using, "real" friends, for instance, have suggested that the time I spend on Facebook might really be a huge waste of time, and querying me about who these  so-called "Facebook Friends" of mine really are.

Such skepticism is well-founded, at least so I think, and I continue to insist that it is a mistake to believe that we can improve our politics by "clicking a link." Joining an online petition, or firing off a form letter that has shown up in our email (or on a Facebook page), is probably not affirmatively negative, but it's not a positive solution to the political challenges that we absolutely must confront, in the "real" world. And I do think that there can be some "negative" impacts of our growing predilection for online politics, because we are misguided, and thrown off course, to the degree that any of us comes to believe that online engagement is an acceptable way to "do politics" in the 21st Century.

Armed with such skepticism, I nonetheless thought The Times' article made a profoundly important point about the way that technology can be used to create a more human world - and a more healthy, and real, politics. I commend that Times' article to you: "Italian Neighbors Build a Social Network, First Online, Then Off."

The key point, as far as I am concerned, is the "Then Off" part of the formula.

We can use online tools to get in touch with "real" people, who live in the "real" world. But our online and "virtual" communications must, ultimately, be precipitated into real contacts with those people on the streets we really walk. Virtual won't do it! We really need to walk those "real streets."

My political experience in Santa Cruz has convinced me that in any healthy political world, "precincting" equals politics.