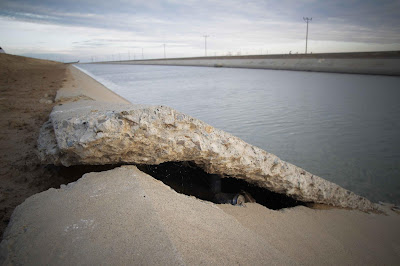 The picture above comes from an online article published in January 2014 by the Rural Community Assistance Corporation, based in West Sacramento. It shows damage to the Delta Mendota Canal caused by subsidence. The ground subsidence that caused this damage was itself caused by the over-pumping of groundwater aquifers in the Central Valley.

Michelle Sneed, a USGS hydrologist, was quoted in this January 2014 article as saying that the rate of subsidence was "nearly a foot a year—some of the fastest rates recorded since the 1950s.”

On Thursday, August 20, 2015, an article in the San Jose Mercury News updated this 2014 report. According to the Mercury article, which is accompanied by a picture of Michelle Sneed standing by this same crack, "parts of the great San Joaquin Valley are sinking almost 2 inches every month."

Two inches per month translates to two feet a year, which means that subsidence is now proceeding twice as fast as Sneed reported in January 2014!

Not only does this kind of ground subsidence damage vital water infrastructure (witness the picture), it also compresses the water-bearing strata that make it possible for groundwater to be recharged into the soil.