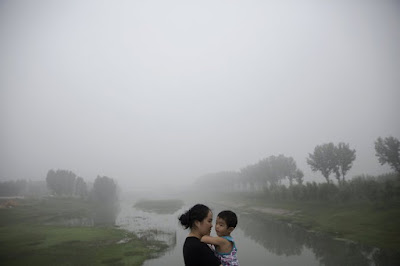 When we talk about money, we might talk about a trillion with a "T," or a billion with a "B," or even a mere million with an "M." In all these cases, we are talking about measurements that apply in the "human world," the world that we create.

Money looms pretty large in its importance in our human world, but as my parents used to tell me, "Money isn't everything."

Clean air, for instance. What's that worth? How do we measure that? What do they say in that MasterCard commercial?

We need to pay less attention to money, and more to the natural environment, the value of which cannot really be measured in money.

The picture above, for instance, which illustrated a New York Times article on air pollution in China, says that outdoor air pollution contributes to the deaths of an estimated 4,400 people a day, or 1.6 million people every year.

That's million with an "M."