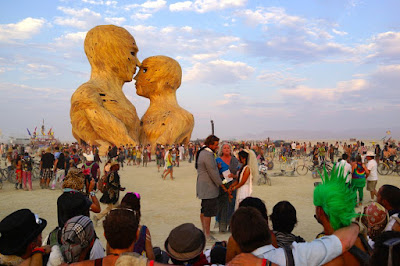 Burning Man is underway, and the San Francisco Chronicle had a story by Carolyne Zinko in its Sunday, August 30th edition that celebrated (and critiqued) the festival as an art event.

Mentioned in the Zinko article were the "Principles" of the Burning Man Festival. There are ten such principles, just like there are Ten Commandments, though I don't observe much overlap.

The 10 Principles of Burning Man

According to Harvey, the principles were not crafted "as a dictate of how people should be and act, but as a reflection of the community’s ethos and culture as it had organically developed since the event’s inception."

So, the principles are not a set of "commandments," but are an "analysis." This seems to be a different way to try to accomplish something that all societies and civilizations must, in fact, do. We must, as we live together and create our world in common, have some sense of what is required of us, to make that common world possible.

Getting the commandments from those in authority (or even better, from God), is certainly one tried and true way to forge a common understanding. The Burning Man principles do it differently. They are the result of an analysis of what has seemed to work to create the positive experiences that are regularly reported out by those in attendance on the Playa.

I sense an analytical research project here! Someone should try to analyze what's worked (and what hasn't worked) in the "non-Playa" society in which we most usually live. You could say that's a "scientific" way to get to morality.

We need some moral guidance, it seems to me, and the commandments from Popes and Presidents don't seem to be working out.

Maybe we should review events, and see what's worked for us.