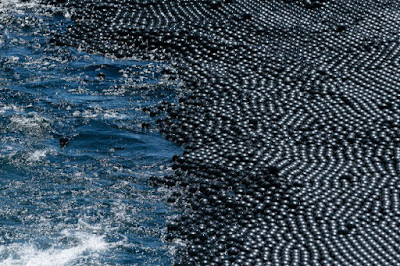 The City of Los Angeles has covered the surface of its Los Angeles Reservoir with 96 million black balls. The picture above shows the balls being dumped into the water. The balls are called "shade balls," and they are made out of plastic.

According to a story in the Los Angeles Daily News, "the black, plastic shade balls — costing 36 cents each — protect the water in the 175-acre reservoir against dust and rain, birds and wildlife, and chemical reactions caused by the sun." These shade balls are "also expected to keep about 300 million gallons of water from evaporating each year," and that's what Mayor Eric Garcetti was bragging about, as he personally helped dump the shade balls into the water: “In the midst of California’s historic drought, it takes bold ingenuity to maximize my goals for water conservation,” Garcetti said. “This effort by LADWP is emblematic of the kind of the creative thinking we need to meet those challenges.”

Some commentators are applauding, but dumping millions of black plastic balls into one of the city's main drinking water reservoirs isn't everyone's idea of "bold ingenuity."

Some people, in fact, think that this is a rather bad idea. In an "Open Forum" piece published in The San Francisco Chronicle on August 21st, and titled, "Shade balls: not a bright solution," Elisa Ringholm said that "protecting the water surface with plastic produced from petroleum ... is ultimately a shallow, short-sighted, veiled solution ... that doesn't get to the root of the problem of California's water crisis."

Ringholm is a staff member at the Story of Stuff Project, which is trying to build a movement that "changes the way we make, use, and throw away stuff." Anyone not familiar with SOS should check out their inaugural video, which is pretty convincing.

So, three immediate problems with the shade ball approach: (1) The balls are made out of hydrocarbons, and pumping out more oil from the ground perpetuates the global warming that is exacerbating our drought; (2) Plastic can deteriorate and leach into the water, thus putting potentially dangerous chemicals directly into the City's drinking water supply; (3) Those 96 million balls are going to deteriorate and will have to be disposed of, somehow, some way, some time. Reference that "Story of Stuff" video to see how stupid that is.

My "Two Worlds" observation is this: Instead of trying to "manufacture" our way out of issues related to our dependence on limited natural resources, we should be using our ingenuity and creativity to figure out ways that we can live within those limits.