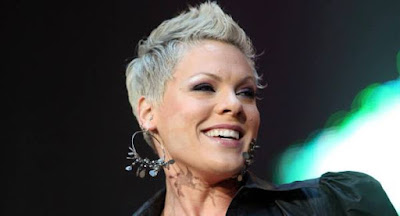 This posting is about politics, but there is a long introduction, focusing on some recent researches I have been undertaking to broaden my knowledge of contemporary music and popular culture.

Slowly but surely, I am trying to catch up with popular culture. Really slowly! In fact, the use of that phrase "catching up" is almost certainly a significant overstatement. I am pretty sure that popular culture is emerging a lot faster than I'm catching up.

As one example, let me identify the image above as a picture of the singer Pink. Apparently, she likes to print it as "P!nk," at least according to Wikipedia. Wikipedia also calls Pink a "superstar," and cites the facts to prove it. Click the link to read about Pink, if you don't know everything already. But I bet you do, right?

I have to admit that I didn't know anything about Pink, until a week or so ago, when I ran across a video of Pink singing "Me and Bobby McGee." In terms of popular culture, the version of that song by Janis Joplin, topping the charts in 1971, is just about exactly at my popular culture baseline. If you want to listen to Janis Joplin singing that song, here's where to click.

Putting 1971 as the baseline point from which I am measuring progress in my quest to "catch up" with popular culture is one way of admitting that I have lots of catching up to do! In fact, I have undoubtedly fallen way too far behind ever to "catch up."

I will say that Pink's version of "Me and Bobby McGee" is awfully good! I am happy that I have at least caught up with that. Here it is:

My first ever introduction to Pink, by means of the video of Pink singing "Me and Bobby McGee," was occasioned by the fact that the video showed up on the News Feed of my Facebook page, and once having seen it, my plans for the evening were redirected. I was diverted from my other occupations, as I searched for more and more Pink, aspiring to "catch up" with her. I figured that catching up with Pink would be at least one way to move forward from my Janis Joplin - 1971 baseline.

Pink has some truly startling stuff, and I really like it. Her Grammy performance on CBS was spectacular, and I have to admit that I have a special admiration for her live performance of "Slut Like You." Click on the links if you want to share my enthusiasm for these researches into contemporary popular culture.

Now, "Slut Like You," which is feminist to the core, is nonetheless about !!!SEX!!! In fact, the so-called "F" word is featured in a prominent part of the lyrics. If I were going to put any warning label on a video, indicating that "viewer discretion is advised," I would think that the video of "Slut Like You" might merit the label.

No warning label appears, however, on Pink's live performance of "Slut Like You," though it is worth noting that the video begins with Pink warning mothers in the audience to put earplugs in their daughters' ears, before she gets into the song.

Here's where the politics comes into this story.

As I continued my explorations of popular culture through watching videos featuring Pink, I came across a video called "Dear Mr. President (Live at Wembley)." This video was taken during a performance by Pink at the Wembley Arena, in London, England, late in 2006. That means that the "President" in question was President George W. Bush.

I recommend that you listen to what Pink had to say to President Bush. Mostly, it was questions. Among other things, she asked:

It's a powerful song, but here is what I could scarcely believe. The video was distributed by MSN Music, and here is what appeared before the music began (a warning):

I was, literally, stunned by this advisory. Whatever advisories our popular puritanism demands when sex is involved, censorship has no place in politics.

When we talk to our elected representatives, from the President on down, we need to be as "explicit" as we can possibly be. We all need to hear the questions. Actually, it would be great to get some answers, too.

Proud to have caught up with P!nk.