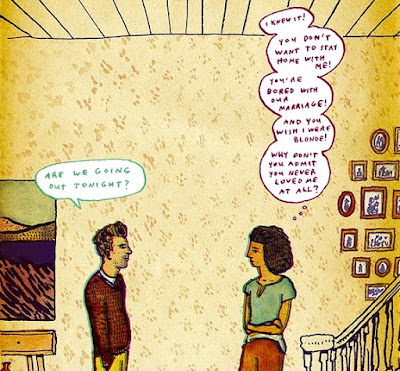 I don't often read O - The Oprah Magazine, but I ran across an article from the magazine a week or so ago that I thought was pretty useful. Maybe on more than one level.

The article was titled "How to Reckon with Emotion and Change Your Narrative." It was was written by Brené Brown, who calls herself "a researcher and a storyteller." Here's how the article starts:


My husband, Steve, and I were having one of those days. That morning, we'd overslept. Charlie couldn't find his backpack, and Ellen had to drag herself out of bed because she'd been up late studying. Then at work I had five back-to-back meetings, and Steve, a pediatrician, was dealing with cold-and-flu season. By dinnertime, we were practically in tears.

Steve opened the refrigerator and sighed. "We have no groceries. Not even lunch meat." I shot back, "I'm doing the best I can. You can shop, too!" "I know," he said in a measured voice. "I do it every week. What's going on?"

I knew exactly what was going on: I had turned his comment into a story about how I'm a disorganized, unreliable partner and mother. I apologized and started my next sentence with the phrase that's become a lifesaver in my marriage, parenting and professional life: "The story I'm making up is that you were blaming me for not having groceries, that I was screwing up."

The point Brown is making is very clear - and actually pretty profound. The external "realities" to which we react are often not "realities" at all. They are simply "stories" that we make up. The "story," in other words, precedes the external data. We don't examine the stimuli that come to us from outside, and deduce from those stimuli what the reality out there is. Quite the opposite; we perceive, outside of ourselves, the realities that we expect to find.

I've been reading some technical books about the nature of  consciousness and perception, and there do seem to be some good arguments that this is exactly how we formulate our understanding of the world, at least a lot of the time. We have a history to draw on, so in any particular instance, we know what we expect. Then, we gather the data from the outside world that seems to conform to the reality we are already pretty sure exists.

It's all unconscious, too, so the little "mantra" that Brown is recommending is quite helpful, because it's intention is to make conscious what has been unthought about. If we can just remind ourselves, explicitly, that we are "telling ourselves a story" when we think we understand something, we can then entertain the idea that there may be other explanations for what we seem to see, hear, or comprehend.

I've been in enough conflicts like the one at the refrigerator, described above, to value Brown's advice.

But I also think that we would do well to subject our "political" as well as our "personal" certainties to this kind of skeptical cross examination.

The story I'm making up is that the Democrats ....

I think we can figure out a story that we'd all like! Or at least most of us. Most of the time.

Maybe we should start working on that!