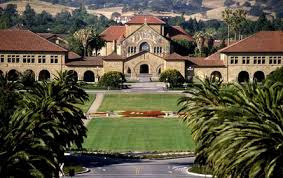 I grew up in Palo Alto, and went to Stanford University. This is the 50th anniversary of my graduation, and a rather thick 50th Reunion Class Book just recently appeared in my mailbox. Every graduate had the opportunity to submit a page, and many did. Many did not, too.

I am making my way through all these pages, and am getting a feeling for what life has been like for my fellow students from the Stanford Class of 1965. In a lot of ways, my own adventures have been rather typical. Sixty percent of my classmates, for instance, have at some point been employed as a teacher. Not so many have run for political office, though; only seven percent have done that, and I suppose that not all of those people won.

At any rate, the class biographies are fascinating, but what has intrigued me most has been the introduction to the Class Book, titled "Fifty Years Later..."

The introduction does a comparison of Stanford then and now, and as it turns out (and I really actually knew this), that the Stanford University of today is a fundamentally different place from the place where I went to school.

I majored in American History at Stanford, and received my bachelors degree with Honors in Social Thought and Institutions. I am still there, intellectually, but Stanford has moved on. The same kind of transformations have been working themselves out at the University of California at Santa Cruz, which just dumped (without any discernible reason I could see) the opportunity to host the annual Santa Cruz Shakespeare summer festival.

The humanities and history are in retreat. Money advances.

But "advance" is probably not the right word!