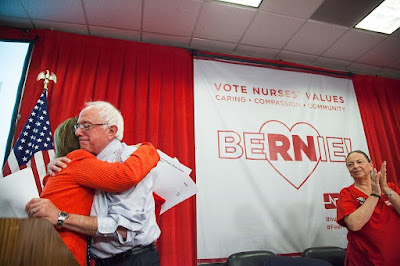 I, personally, think that this is rather significant.

In the story about the union's endorsement, Rose Ann DeMoro, the union's Executive Director, said that Hillary Clinton had come across as "evasive" in a personal interview with union leaders. Sanders, she said, is "the real, real deal."

My Five Simple Rules of politics ends up on the following note:


Rule #5:
“Be honest.” This means more than the minimum requirement of not taking bribes, though of course that is important. What this Rule means is that you've got to tell people what you really think. That lets them decide whether they like your positions, and whether they like you. That puts the people in charge of politics.


We need to insist that candidates not try the tactics of evasion, to be able to appeal to everyone. Politics is about making choices. We can't choose if we don't know what the real differences are.

I think the nurses got it right. I call that a "healthy" politics!