#233 / Take A Look Into That Community Mirror 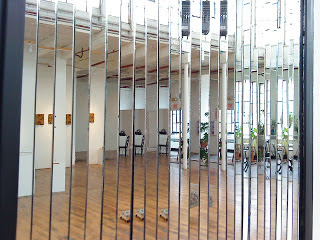 Santa Cruz is known for its moderate climate, the natural beauty of its coastline, redwood forests, alternative community lifestyles, and socially liberal leanings.

Some people (whose opinions are being promoted by the local newspaper), seem to think that those "alternative community lifestyles," and "socially liberal leanings," might really have to go. Let's take Claudia Rimai as a fair example of this species.

In an Op-Ed article published in the Santa Cruz Sentinel on  August 8, 2015, Rimai said that Santa Cruz "must look into the mirror." In fact, Rimai opines:

Apparently, Rimai is seriously suggesting that there is some sort of general feeling in Santa Cruz that "authority is evil," that "police are the enemy," and that "all development is bad." I have lived here for more than fifty years, and was an elected representative for twenty years, and none of these postulates tracks with my experience.

I do think that Wikipedia is right, though, and that Santa Cruz actually does celebrate "alternative community lifestyles" and "socially liberal leanings."

We had an active community of midwives before almost any other local communities around the country understood their value. We had a "Women's Health Collective," of, by, and for women, and we have always been a pro-choice community. We had a local medical marijuana cooperative that stood up to the federal government, and our City Council stood right with them. The Mayor personally distributed medical marijuana on the steps of City Hall. We have a lot of acupuncture, and yoga, and art. AND music! We have actually had world famous jugglers and world famous bubble blowers doing their thing on our main street downtown. We have a whole big building, and lots of people using it, called the Resource Center For Nonviolence. Nonviolence! What a concept!! We have a wonderful statue, by the Town Clock, that commemorates the victims of war, instead of those who perpetrate it.

Plus, Santa Cruz actually thinks that protecting the environment is more important than letting developers make the maximum big bucks possible as they seek to pave over productive agricultural land and cram as many units as they can into our residential neighborhoods. We are an official "Nuclear Free Zone," and our County North Coast has been preserved as "open space," instead of being turned into resorts and golf courses for the rich. Hey, Monterey County is great, too, but we are "different." In fact, one of the best and most beloved businesses in downtown Santa Cruz celebrates that difference by selling tee-shirts and signs that say, "Keep Santa Cruz Weird."

You get the idea. What I gave was just a "partial list," but I think it demonstrates that the Wikipedia characterization is "right on." Right on, and many of us are proud of it!

Not everyone, however, is proud of the "alternative" approaches our community exemplifies, and Ms. Rimai's litany of disapproval, as outlined above, is also just a "partial list." Read the entire article to get the full flavor. Rimai starts right off with a tone of maximum snark by saying, "Santa Cruz needs to figure out what it wants to be when it grows up." She says Santa Cruz needs to "start making mature decisions toward that end."

So, just before looking into that community mirror myself, and saying a little bit about what I think about Santa Cruz, can I first ask what qualifications the Santa Cruz Sentinel thinks Claudia Rimai has that make it appropriate for her to tell Santa Cruz residents what our community "must" do?

Why did the Santa Cruz Sentinel pick Claudia Rimai to speak to the future of Santa Cruz?

It turns out that's simple. You can deduce the answer from the very last line of Ms. Rimai's Op-Ed:

The Santa Cruz Sentinel has chosen to elevate Claudia Rimai as an expert on what Santa Cruz "must" do because she doesn't live here! While she apparently did live in Santa Cruz once, she has now moved away, to what she thinks of as a "kinder place." Obviously, Ms. Rimai believes (and the Sentinel with her) that if she wasn't happy with Santa Cruz when she lived here, the fault must lie not with her, but with the community. Only a person with this kind of self-satisfied mindset could muster the effrontery, as a non-community resident, so confidently to tell other people that they need to "figure out what they want to be when they grow up."

Here is what I think. I think the precious gold of what it means to live in Santa Cruz is our community engagement in the very real problems confronted by all communities, including ours. Growth and development pressures are everywhere. We have chosen to address them through citizen enacted initiative measures that gave us a permanent Greenbelt, mandate that at least a minimum amount of affordable housing be built, as market rate housing goes forward, and that protect our commercially viable agricultural land. We have a creative and innovative network of social services, based on nonprofits of, by, and for our local community. We continue to provide a home for world class artists.

But, the overwhelming problems related to the economic disintegration being experienced generally in the United States, as lower-income and middle-income people are shut out, and the super-rich win, affect our community, too. Putting mentally ill and poor people out on the street affects us, and San Jose, and San Francisco, and Every City, Everywhere.

Crime happens, though the crime statistics published on the City's website seem to indicate a much lower crime rate today (in 2014) than in 2004-2005. Who knows, maybe that's when Ms. Rimai moved out!*

When we look into a mirror, if we're honest, we don't always get a clear, crisp image back. We have LOTS of problems: crime, homelessness, a lack of affordable housing, traffic, a limited water supply. This is just one more "partial list."

But we have a community that has, since I moved to the County in 1961, and to the City in 1971, always been engaged, and enterprising, and innovative.

When things need to be addressed, we do our best. We mobilize our resources. And when that's not enough, we keep working on it.

Let me say this to my friends who may be getting discouraged, or who got discouraged when they saw our local newspaper promoting the thoughts of a disaffected, out-of-community expatriate: the solution is not to move away.

The solution is not to "step back," and to succumb to fear of failure and disillusionment.

The solution is (and I go with Sheryl Sandberg on this, and with her book of this title) to: 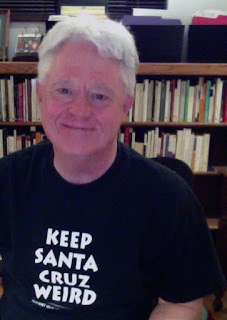 *Just a snarky comment right back, in response to that snarky "What do you want to be when you grow up?" question.