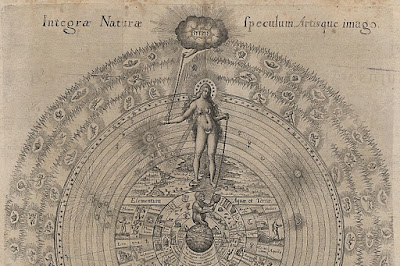 I have been making daily postings to this Two Worlds blog since about 2010, and I actually made some postings even earlier, in 2009. I think I am up to something over 2,000 postings by now, all more or less related to the idea that we live in "Two Worlds" simultaneously.

I find this construct helpful. Of course, it's just an "idea," a way of explaining our situation.

The "human world," in which we most immediately reside, is a world we build ourselves. It is the realm in which our human freedom is displayed. The laws of our "human world" are the laws that we determine we want to follow; they are "prescriptions," which we write for ourselves. By these "human laws" we tell ourselves what we "ought" to do, or what we "want" to do - and of course we can (and do) change our mind. Our human laws do not, in fact, actually constrain us. We call them "laws," but they can never make us do what they recommend. They are just like doctors' prescriptions, which can't make us take the medicine that they advise.

Our "human world" is built within the World of Nature, upon which we ultimately depend. The "natural laws" that govern the World of Nature are not ones that derive from human choice. You can't "break" the law of gravity (as an example). You can't pump carbon dioxide into the atmosphere in ever increasing amounts and not expect the world to heat up. The "laws of nature" are not prescriptions. They are not "advisory." The "laws of nature" are descriptions. They tell us what "will" happen, not what we want to happen, or think ought to happen.

The reason I find the "Two Worlds" construct helpful is that I think it properly orients us to the reality of our human existence.

Within our world, we can choose to do whatever we want, and can build a world to accomplish that. Should we decide that we need a new law governing marriage (or taxation), we can make the change. We can also choose whether or not to conform our activities to what the laws of the World of Nature demand. If we don't want the world to heat up, for example, we can stop burning hydrocarbon fuels. It's our choice.

In the World of Nature, the laws don't tell us what we have to do, but they do tell us what our limits are. And as Conservation International tells us, in a compelling series of short videos called "Nature is speaking," Nature doesn't need people. People need Nature. We ought to pay attention to those limits set by the Natural World.

While that seems obvious to me, it also seems clear to me that we humans often think we can "break" the constraints and limits of the Natural World (treating Nature as though it were "our" world, subject to our command). Conversely, we often seem to act as though the arrangements that exist in our "human world" are fixed and inevitable; yet, the exact opposite is the truth.

I thought up the Two Worlds title for this blog based on the thinking I have just described. As I have been writing my individual postings, however, I have begun wondering whether the "Two" in the title may be a bit misleading. I remember writing last year about Barbara Ehrenreich, and her experience with "transcendence." I suggested that we perhaps live in "Three Worlds," rather than "Two," with World number Three being, in essence, a world of the spirit, the world of transcendence, a realm of which we get various evidences but which is not immediately tangible or measurable, the way those other "Two Worlds" are.

If it really takes "Three Worlds" to describe our situation completely, World number Three would be some kind of "spiritual" realm. I am clear that humans beings did not "create" the World of Nature, upon which all life ultimately depends, and I have been known to call the World of Nature the "World that God created." The idea that we exist as creatures, utterly dependent on a Creator God, has largely fallen out of favor. Query whether this hasn't been a factor in our apparent obliviousness to the destruction that our activities (carried out in the human world) are wreaking upon the World of Nature. Jerry Mander, in a book I have mentioned in this blog, In The Absence of the Sacred, gets to the point.

The other day, I came upon an article about "panpsychism," published in JSTOR Daily. JSTOR Daily, I think, would be counted a respected academic journal. If you'd like to read up on panpsychism, you can read the article, or you can click this link for a description in the Stanford Encyclopedia of Philosophy. According to the Stanford encyclopedia, "panpsychism" is "the doctrine that mind is a fundamental feature of the world which exists throughout the universe." Maybe, there is some clue there to what might be the nature of that "World Number Three" that may be missing from my "Two Worlds" construct.