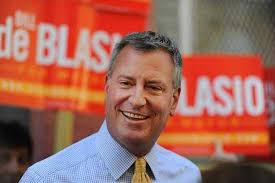 The Wall Street Journal is now opining that New York City Mayor Bill de Blasio (pictured) is quite likely running for President (as a Democrat, most certainly)! A quasi-prediction to this effect has surfaced in a June 9, 2015 column titled "Hillary Clinton's Other Bill Problem."

William McGurn, whose column in The Journal is titled "Main Street," observes that "in all but name, Mr. de Blasio  is making his own run for the White House."

Who knows? McGurn may be right. It is certainly only fair to foster an ethos of "equal opportunity speculation" here in this Two Worlds blog. If you read my posting yesterday, you will remember that I have been doing my own opining about potential Democratic Party candidate alternatives to Hillary Clinton, suggesting that serious consideration might well be given to California Governor Jerry Brown.

For me, though, what was most interesting in McGurn's column was not so much his speculation about the possibility that Mayor de Blasio might end up challenging what most see as an "inevitable" Hillary Clinton candidacy. I was most taken by McGurn's reflexive rejection of anything that might be deemed politically "progressive." Of course, in this approach McGurn definitely adheres to the party line of The Wall Street Journal.

McGurn defines "progressivism" as "the haunting fear that someone, somewhere may be making a profit," and "Mr. de Blasio's real Achilles' heel," according to McGurn, "is progressivism itself. It just doesn't work."

Well, I think that a set of policies that makes sure that about 1% of the population makes "a profit" or what I think a fair-minded person might call an "obscene profit," while everyone else is driven to the brink of poverty, is not really "working," either.

Here's what does work, in my opinion: What works is a political, social, and economic system based on the idea that we are in this life "together," and are not simply a collection of unrelated individuals. What works is an approach to politics that always looks for community-based and collective approaches to the economic, political, and social issues we confront.

That's my definition of "progressivism," too.