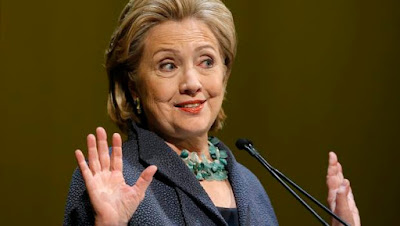 Last Sunday, June 7th, I read three different articles about Hillary Clinton, and her bid to be President.

Frank Bruni, an Op-Ed columnist for The New York Times, wrote an article titled, "Hillary The Tormentor." The column was headed by a graphic of a "retouched" placard: 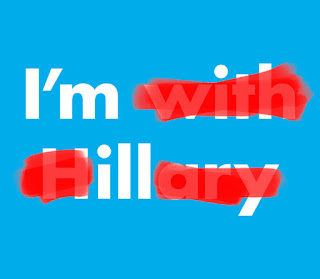 The gist of the Bruni article was that Hillary Clinton (and her husband Bill) each have an amazing ability to evoke a profound and dedicated political allegiance, while they also inspire, at the very same time, a deep and disturbing feeling of repugnance in those who would actually like to support them.

This evaluation "speaks to my own condition," as the Quakers would say. Bruni concludes that Democrats are just going to have to suck it up, and overcome the (well-justified) repugnance they might feel towards Hillary, and get with the program. Bruni mentioned as an historical parallel the Republican Party's reluctant decision to nominate Richard Nixon as that party's presidential standard bearer.

Dana Milbank, a political writer for the Washington Post, had a column in my hometown newspaper, the Santa Cruz Sentinel. Milbank called Hillary Clinton "inauthentic." Milbank's column pretty much followed up on the "Hillary makes me ill theme" rehearsed by Bruni.

Finally, and most to the point for this blog posting, The New York Times also ran a column by Ross Douthat. Douthat's column was titled, "Running Against Hillary." Douthat voiced an appreciation for Democratic Party candidates Bernie Sanders, Martin O'Malley, and Lincoln Chafee. He noted that their campaigns were, almost certainly, hopeless, predicting (along with Bruni) that Clinton would prevail, and that Hillary would get the Democratic Party nomination despite her "discomfiting" ethics. Douthat further noted that Hillary's dubious ethics will be a weakness when Hillary squares off with the Republican nominee in the November 2016 election.

Thank goodness for these three stalwarts, says Douthat, for "they are stepping up where others quailed, laying their bodies on democracy's altar, saving their party's nominating contest from resembling a presidential re-election in Kazakhstan."

This sacrifice by candidates with no chance ultimately to win, Douthat says, at least has this benefit: "whatever happens in a Clinton presidency, her supporters won't be able to say that they weren't warned."

Assuming that you "buy" the analysis that says none of the alternative Democratic Party candidates have a chance to beat Hillary, and assuming that continuing revelations of Hillary Clinton's personal profiteering from her official positions will continue to fuel those feelings of repugnance about her ethics that even her supporters can't help but acknowledge, is Douthat's analysis accurate? Is Bruni's conclusion that the Democrats have no practical choice in fact a genuine "given?"

Well, I am told by past associates of California's own Governor, Jerry Brown (who has run for President before, you'll remember), that no less an authority than Mother Teresa (on her way to sainthood, certainly) told Jerry Brown when he worked with her in India that he was "destined to be President."

If it should happen that Jerry Brown ultimately turns out to be an "alternative" candidate to Hillary Clinton, you heard it here first! 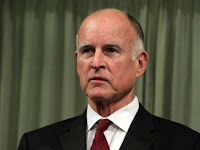